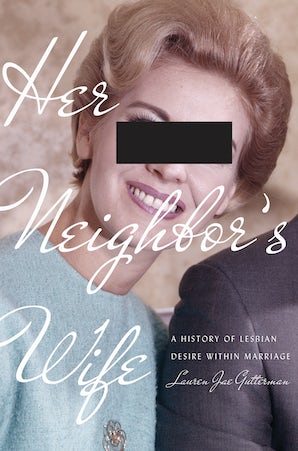 A History of Lesbian Desire Within Marriage

At first glance, Barbara Kalish fit the stereotype of a 1950s wife and mother. Married at eighteen, Barbara lived with her husband and two daughters in a California suburb, where she was president of the Parent-Teacher Association. At a PTA training conference in San Francisco, Barbara met Pearl, another PTA president who also had two children and happened to live only a few blocks away from her. To Barbara, Pearl was "the most gorgeous woman in the world," and the two began an affair that lasted over a decade.

Through interviews, diaries, memoirs, and letters, Her Neighbor's Wife traces the stories of hundreds of women, like Barbara Kalish, who struggled to balance marriage and same-sex desire in the postwar United States. In doing so, Lauren Jae Gutterman draws our attention away from the postwar landscape of urban gay bars and into the homes of married women, who tended to engage in affairs with wives and mothers they met in the context of their daily lives: through work, at church, or in their neighborhoods.

In the late 1960s and 1970s, the lesbian feminist movement and the no-fault divorce revolution transformed the lives of wives who desired women. Women could now choose to divorce their husbands in order to lead openly lesbian or bisexual lives; increasingly, however, these women were confronted by hostile state discrimination, typically in legal battles over child custody. Well into the 1980s, many women remained ambivalent about divorce and resistant to labeling themselves as lesbian, therefore complicating a simple interpretation of their lives and relationship choices. By revealing the extent to which marriage has historically permitted space for wives' relationships with other women, Her Neighbor's Wife calls into question the presumed straightness of traditional American marriage.

"The strength of the book is Gutterman’s investment in reviewing and utilizing the personal letters that many women wrote to advocates...The correspondence and other sources that she examines also help her share stories from Black and Latina women who loved women, with some inclusion of Asian and Native American women as well, thus broadening the voices and experiences missing from white-focused lesbian narratives…[A] well-documented cultural history that reminds us just how deeply the 1970 feminist slogan ‘the personal is political’ reflected many women’s struggles to live their lives honestly and openly regarding their same-sex desires."—Journal of Women's Historty

"Her Neighbor’s Wife is beautiful and smart and should be widely read…Gutterman’s broadest intervention into the historiography is her contention that marriage was queer. She points out that you got screened for the military but not for your marriage license; that you could lose your teaching license for being gay but remain in your marriage. Marriage in the postwar period contained room for queerness and, in making room, it became queer itself. Though we cannot know numbers, Gutterman is utterly convincing that marriage was very queer indeed."—The Sixties

"Ambitious and wide-ranging, Her Neighbor’s Wife opens interesting, provocative questions and modes of inquiry for historians of sexuality and the field of LGBTQ studies…In addition to Gutterman’s careful attention to interlacing feminist and queer analysis, another strength of [the book] is the assembled archive…This, combined with Gutterman’s own oral histories and her sensitive, thoughtful reading of primary sources, makes this book an exemplar of methodological rigor."—Journal of the History of Sexuality

"Her Neighbor's Wife is a revelation. Lauren Jae Gutterman locates lesbian histories not at the margins but at the center of postwar American life, often accommodated within marriages with men and family life. Alert to the complex meanings of married women's desire for women, beyond the poles of protest and conformity, Gutterman queers postwar marriage, the family, and normativity itself."—Regina Kunzel, author of Criminal Intimacy: Prison and the Uneven History of Modern American Sexuality

"In a field dominated by studies of gay men (still), Her Neighbor's Wife offers an LGBT history that centers a gendered analysis of women's lives. It is a critical intervention in histories of marriage, same-sex desires, feminism, and therapeutic ideas of the authentic self."—Rebecca L. Davis, author of More Perfect Unions: The American Search for Marital Bliss

"Her Neighbor's Wife is an engaging, highly readable sociocultural history that serves as a necessary and illuminating corrective to the general dearth of lesbian history. Lauren Jae Gutterman shows the concept of fluidity has a much deeper past than what is typically imagined and that heterosexual marriage was much less straight than it seemed."—Heather Murray, author of Not in This Family: Gays and the Meaning of Kinship in Postwar North America