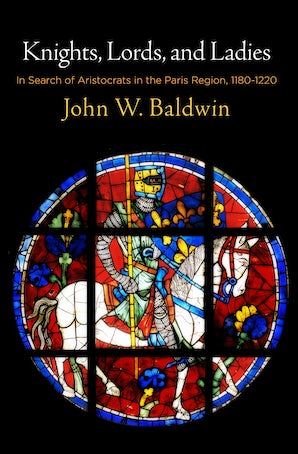 At the beginning of the twelfth century, the region around Paris had a reputation for being the land of unruly aristocrats. Entrenched within their castles, the nobles were viewed as quarrelling among themselves, terrorizing the countryside, harassing churchmen and peasants, pillaging, and committing unspeakable atrocities. By the end of the century, during the reign of Philip Augustus, the situation was dramatically different. The king had created the principal governmental organs of the Capetian monarchy and replaced the feudal magnates at the royal court with loyal men of lesser rank. The major castles had been subdued and peace reigned throughout the countryside. The aristocratic families remain the same, but no longer brigands, they had now been recruited for royal service.

In his final book, the distinguished historian John Baldwin turned to church charters, royal inventories of fiefs and vassals, aristocratic seals and documents, vernacular texts, and archaeological evidence to create a detailed picture of the transformation of aristocratic life in the areas around Paris during the four decades of Philip Augustus's reign. Working outward from the reconstructed biographies of seventy-five individuals from thirty-three noble families, Baldwin offers a rich description of their domestic lives, their horses and war gear, their tourneys and crusades, their romantic fantasies, and their penances and apprehensions about final judgment.

Knights, Lords, and Ladies argues that the aristocrats who inhabited the region of Paris over the turn of the twelfth century were important not only because they contributed to Philip Augustus's increase of royal power and to the wealth of churches and monasteries, but also for their own establishment as an elite and powerful social class.

Chapter 1. In Search of Aristocrats
Chapter 2. Who's Who
Chapter 3. Family
Chapter 4. Aristocratic Castles and Residences
Chapter 5. Fiefs and Homage: The Nomina militum and Scripta de feodis
Chapter 6. The Landed Wealth of Lay Aristocrats
Chapter 7. The Landed Wealth of Churches and Monasteries
Chapter 8. The Kingdom of Heaven
Chapter 9. The Voice of Vernacular French
Chapter 10. Knights at the Cathedral of Chartres
Appendix 1. Tables
Appendix 2. Genealogies

"[A] book that displays the full array of Baldwin's mastery over the historian's sources and method attained over the course of his life . . . The exploration of the aristocrats' social, economic, and mental worlds using this wide range of sources is a masterful feat . . . With Knights, Lords, and Ladies Baldwin has left us with an excellent example, useful to graduate students and seasoned scholars alike, on how to define the limits of an inquiry, assemble sources relevant to that inquiry, and interpret them deeply but with restraint."—Canadian Journal of History

"It is a tribute to [Baldwin's] scholarship that even without his own final revisions, the book brims with information that will be valuable to specialists and to students of French history. The questions he has raised will stand as an invitation to a new generation of scholars in search of medieval aristocrats and their world."—Speculum

"This last book by a master historian not only sums up a life's work, but probes it afresh. Drawing on visual evidence and current archaeology as well as the literary culture he knew so well, John W. Baldwin recreates the elite society of Parisian France in the time of Philip Augustus with precision and depth."—Thomas N. Bisson, Harvard University

"John Baldwin's final masterwork is the crowning achievement of a life dedicated to the history of the Middle Ages. Even more, by bringing together for the first time every kind of documentation imaginable, he here offered at the micro level a model without parallel for the writing of 'total history.'"—Jean-Claude Schmitt, École des Hautes Études en Sciences Sociales