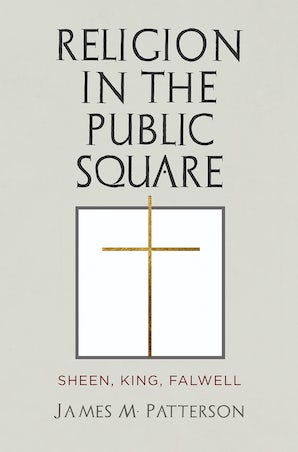 Religion in the Public Square

In Religion in the Public Square, James M. Patterson considers religious leaders who popularized theology through media campaigns designed to persuade the public. Ven. Fulton J. Sheen, Dr. Martin Luther King Jr., and Rev. Jerry Falwell differed profoundly on issues of theology and politics, but they shared an approach to public ministry that aimed directly at changing how Americans understood the nature and purpose of their country. From the 1930s through the 1950s, Sheen was an early adopter of paperbacks, radio, and television to condemn totalitarian ideologies and to defend American Catholicism against Protestant accusations of divided loyalty. During the 1950s and 1960s, King staged demonstrations and boycotts that drew the mass media to him. The attention provided him the platform to preach Christian love as a political foundation in direct opposition to white supremacy. Falwell started his own church, which he developed into a mass media empire. He then leveraged it during the late 1970s through the 1980s to influence the Republican Party by exhorting his audience to not only ally with religious conservatives around issues of abortion and the traditional family but also to vote accordingly.

Sheen, King, and Falwell were so successful in popularizing their theological ideas that they won prestigious awards, had access to presidents, and witnessed the results of their labors. However, Patterson argues that Falwell's efforts broke with the longstanding refusal of religious public figures to participate directly in partisan affairs and thereby catalyzed the process of politicizing religion that undermined the Judeo-Christian consensus that formed the foundation of American politics.

"Informative and provocative, Religion in the Public Square is original in its interpretations and judicious in its assessments. James M. Patterson makes a valuable contribution to our understanding of the role of preachers and public religion in the United States in the second half of the twentieth century"—Robert Kraynak, Colgate University