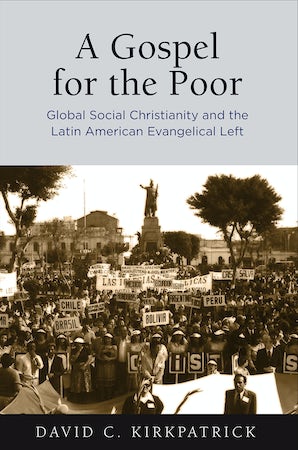 A Gospel for the Poor

In 1974, the International Congress on World Evangelization met in Lausanne, Switzerland. Gathering together nearly 2,500 Protestant evangelical leaders from more than 150 countries and 135 denominations, it rivaled Vatican II in terms of its influence. But as David C. Kirkpatrick argues in A Gospel for the Poor, the Lausanne Congress was most influential because, for the first time, theologians from the Global South gained a place at the table of the world's evangelical leadership—bringing their nascent brand of social Christianity with them.

Leading up to this momentous occasion, after World War II, there emerged in various parts of the world an embryonic yet discernible progressive coalition of thinkers who were embedded in global evangelical organizations and educational institutions such as the InterVarsity Christian Fellowship, the International Fellowship of Evangelical Students, and the International Fellowship of Evangelical Mission Theologians. Within these groups, Latin Americans had an especially strong voice, for they had honed their theology as a religious minority, having defined it against two perceived ideological excesses: Marxist-inflected Catholic liberation theology and the conservative political loyalties of the U.S. Religious Right.

In this context, transnational conversations provoked the rise of progressive evangelical politics, the explosion of Christian mission and relief organizations, and the infusion of social justice into the very mission of evangelicals around the world and across a broad spectrum of denominations. Drawing upon bilingual interviews and archives and personal papers from three continents, Kirkpatrick adopts a transnational perspective to tell the story of how a Cold War generation of progressive Latin Americans, including seminal figures such as Ecuadorian René Padilla and Peruvian Samuel Escobar, developed, named, and exported their version of social Christianity to an evolving coalition of global evangelicals.

"[An] important book…[that] deserves a wide readership. It is meticulously researched and superbly written."—Journal of American History

"Kirkpatrick's Gospel for the Poor is groundbreaking in its identification of transnational flows of evangelical thought and argument for the influence of Latin America on evangelical understandings of social mission. Its deep studies of the complex relationships between U.S. and Latin American leaders is a useful model for historians of missions and postcolonial churches."—H-DIPLO

"A Gospel for the Poor makes several important historiographical and methodological interventions into how the story of global evangelicalism ought to be told. Any scholar or student of world Christianities, contemporary evangelicalism, transnationalism, or social theologies will find this book interesting and important to their understanding of global Christian movements and networks."—Reading Religion

"Featuring impressive research in multiple languages, important historical recovery from the archives, theological nuance, and attention to context, A Gospel for the Poor captures perfectly the complexities of far-flung global evangelical relationships in the Cold War era."—David R. Swartz, author of Moral Minority: The Evangelical Left in an Age of Conservatism