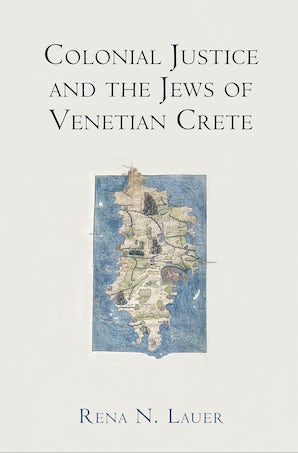 Colonial Justice and the Jews of Venetian Crete

When Venice conquered Crete in the early thirteenth century, a significant population of Jews lived in the capital and main port city of Candia. This community grew, diversified, and flourished both culturally and economically throughout the period of Venetian rule, and although it adhered to traditional Jewish ways of life, the community also readily engaged with the broader population and the island's Venetian colonial government.

In Colonial Justice and the Jews of Venetian Crete, Rena N. Lauer tells the story of this unusual and little-known community through the lens of its flexible use of the legal systems at its disposal. Grounding the book in richly detailed studies of individuals and judicial cases—concerning matters as prosaic as taxation and as dramatic as bigamy and murder—Lauer brings the Jews of Candia vibrantly to life. Despite general rabbinic disapproval of such behavior elsewhere in medieval Europe, Crete's Jews regularly turned not only to their own religious courts but also to the secular Venetian judicial system. There they aired disputes between family members, business partners, spouses, and even the leaders of their community. And with their use of secular justice as both symptom and cause, Lauer contends, Crete's Jews grew more open and flexible, confident in their identity and experiencing little of the anti-Judaism increasingly suffered by their coreligionists in Western Europe.

Colonial Justice and the Jews of Venetian Crete is a riveting examination of intra-Jewish litigation that
complements the growing historiography on premodern Crete...Weaving together the extant judicial documents of the medieval Jewish community (kahal), specifically the legislative ordinances of the Taqqanot Qandiya and the ducal court records now housed in the Archivio di Stato di Venezia, Lauer exposes how justice for the Cretan Jews relied on non-Jewish courts to resolve internal communal matters related to taxation, inheritance, marriage, and divorce, among other concerns.

"Rena Lauer has written an excellent book. In clear, flowing prose she depicts the lives of Jews living in Crete, and mostly in Candia (today's Heraklion), under Venetian rule (thirteenth-seventeenth centuries). Examining a rich array of sources, including the regulations of the Candia Jewish community and Venetian archival records, Lauer takes the reader on a journey through the streets of late-medieval Candia, the Jewish quarter, the synagogue, and the lives of the community's leaders. In the process, the author challenges common perceptions historians have made about Jewish autonomy under Christian (and Muslim) rule, the role of Jewish law and communal authority in molding day-to-day practices, the commitment of ordinary Jews to the authority of their leaders and to communal institutions, and the notion that going to gentile courts to settle a dispute between two Jews was frowned upon. Lauer's book joins a group of recent studies that have sought to dismantle old assumptions about Jews and their communities, most notably in a Mediterranean context. And hers does so especially well, with a case study that demonstrates a continuity between earlier, medieval examples, and the later Ottoman ones."—Medieval Encounters

"Lauer’s writing is crisp...Colonial Justice and the Jews of Venetian Crete is an exciting addition to the field of Jewish studies. It deals with much more than just Jews and the law; it offers a social history of Jews on the island of Crete"—AJS Review

"Colonial Justice and the Jews of Venetian Crete is an excellent piece of interdisciplinary scholarship examining the interplay between the Jewish community of Candia, the main port city and capital of Venetian Crete, and the Venetian colonial state...[A] pleasure to read. Lauer writes well and has a good eye for telling anecdotes. Her discussion of marital disputes is a particularly good example of how her attention to archival details and ability to situate them within multiple cultural contexts can produce major new insights."—The Medieval Review

"A fascinating and much-needed contribution to our understanding of the Jews of Candia and their legal options under Venetian rule."—Sally McKee, University of California, Davis