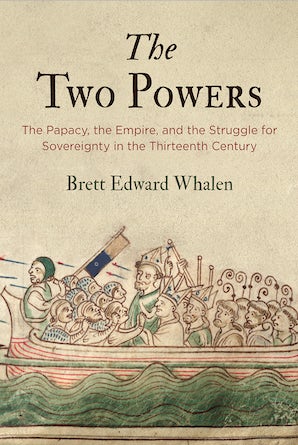 The Papacy, the Empire, and the Struggle for Sovereignty in the Thirteenth Century

Historians commonly designate the High Middle Ages as the era of the "papal monarchy," when the popes of Rome vied with secular rulers for spiritual and temporal supremacy. Indeed, in many ways the story of the papal monarchy encapsulates that of medieval Europe as often remembered: a time before the modern age, when religious authorities openly clashed with emperors, kings, and princes for political mastery of their world, claiming sovereignty over Christendom, the universal community of Christian kingdoms, churches, and peoples.

At no point was this conflict more widespread and dramatic than during the papacies of Gregory IX (1227-1241) and Innocent IV (1243-1254). Their struggles with the Hohenstaufen Emperor Frederick II (1212-1250) echoed in the corridors of power and the court of public opinion, ranging from the battlefields of Italy to the streets of Jerusalem. In The Two Powers, Brett Edward Whalen has written a new history of this combative relationship between the thirteenth-century papacy and empire. Countering the dominant trend of modern historiography, which focuses on Frederick instead of the popes, he redirects our attention to the papal side of the historical equation. By doing so, Whalen highlights the ways in which Gregory and Innocent acted politically and publicly, realizing their priestly sovereignty through the networks of communication, performance, and documentary culture that lay at the unique disposal of the Apostolic See.

Covering pivotal decades that included the last major crusades, the birth of the Inquisition, and the unexpected invasion of the Mongols, The Two Powers shows how Gregory and Innocent's battles with Frederick shaped the historical destiny of the thirteenth-century papacy and its role in the public realm of medieval Christendom.

"[A] penetrating look at the incredible power struggles of 13th-century Europe…Whalen has written a wise, in-depth, and passionate account of the struggle of the two 13th-century Popes Gregory the IX and Innocent the IV, both of whom were determined to put their political agendas ahead of the Church and their own priestly roles...This is an easy book to read, especially for anyone interested in the history, religion, and politics of the medieval world. It is well written, and the well-organized ideas help readers understand specific regions, topics, and periods. This is the resource book lecturers and students have been waiting for."—Reading Religion

"The Two Powers offers a new and convincing statement on the relations between papacy and empire in the first half of the thirteenth century and demolishes the current rather simplistic assessments of papal attitudes to Frederick II."—R. N. Swanson, University of Birmingham

"Brett Edward Whalen narrates engagingly with a wonderful eye for the telling detail or anecdote. Never the cheerleader nor the scold, he looks carefully at all sides in each major stage of the ongoing confrontation between Frederick II and the popes and makes an original contribution of paradigmatic significance."—Thomas F. X. Noble, University of Notre Dame