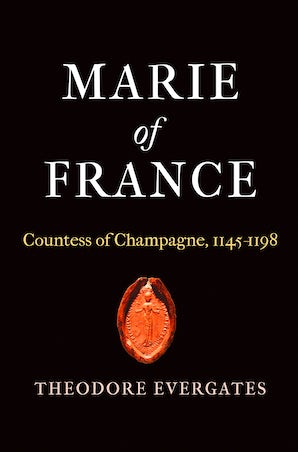 Countess Marie of Champagne is primarily known today as the daughter of Louis VII of France and Eleanor of Aquitaine and as a literary patron of Chrétien de Troyes. In this engaging biography, Theodore Evergates offers a more rounded view of Marie as a successful ruler of one of the wealthiest and most vibrant principalities in medieval France.

From the age of thirty-four until her death, Marie ruled almost continuously, initially for her husband, Henry the Liberal, during his journey to Jerusalem, then for her underage son, Henry II, and after his majority, during his absence on the Third Crusade and extended residence in the Levant. Presiding at the High Court of Champagne and attending to the many practical duties of governance, Marie acted with the advice of her court officers but without limitation by either the king or a regency council. If Henry the Liberal created the county of Champagne as a dynamic and prosperous state, it was Marie who expertly preserved and sustained it.

Evergates mines Marie's letters patent and the literary and religious texts associated with her to glean a fuller picture of her life and work. He situates Marie within the regional institutions and external events that influenced her life as well as within her extended families of royal half-siblings—including King Philip II of France and her Plantagenet brothers—and her many in-laws, including the queen mother Adele and Archbishop William of Reims. Those who knew Marie best describe her as determined, gracious, and pious, as well as an effective ruler in the face of several external threats.

"A fully rounded biography of a great medieval lady is hardly possible, given the limited sources. Nonetheless, Theodore Evergates, with his knowledge of the sources gained from years of studying the counts of Champagne, has given the fullest portrait of Marie of France to date. It is likely that his book will be stand for many years as the standard study of Marie of France."—Sehepunkte

"[Marie of France] . . . contributes to our increasing realization that ruling women were nothing unusual in medieval France with its detailed account of Marie's political activity . . . [F]or literary historians, it fills in a picture that had until now been extremely limited of this important patron."—French History

"Medievalists will surely rely on Marie of France as the standard reference on the countess' life for years to come, while scholars of the history of religion more broadly will find it useful for its discussion of the varying forms of interaction between the church and members of the lay aristocracy in the High Middle Ages. Readers of all backgrounds, however, will appreciate the skill with which Evergates constructs an eminently readable narrative from such fragmented sources."—Reading Religion

"A masterful biography and a welcome, and much needed, contribution to our understanding of medieval aristocratic women."—Amy Livingstone, Ball State University