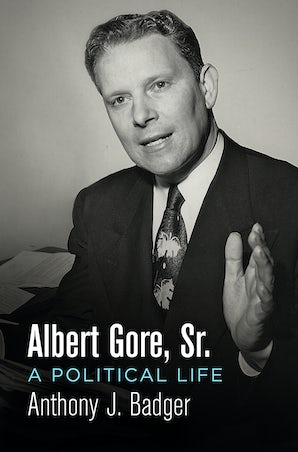 In chronicling the life and career of Albert Gore, Sr., historian Anthony J. Badger seeks not just to explore the successes and failures of an important political figure who spent more than three decades in the national eye—and whose son would become Vice President of the United States—but also to explain the dramatic changes in the South that led to national political realignment.

Born on a small farm in the hills of Tennessee, Gore served in Congress from 1938 to 1970, first in the House of Representatives and then in the Senate. During that time, the United States became a global superpower and the South a two party desegregated region. Gore, whom Badger describes as a policy-oriented liberal, saw the federal government as the answer to the South's problems. He held a resilient faith, according to Badger, in the federal government to regulate wages and prices in World War II, to further social welfare through the New Deal and the Great Society, and to promote economic growth and transform the infrastructure of the South.

Gore worked to make Tennessee the "atomic capital" of the nation and to protect the Tennessee Valley Authority, while at the same time cosponsoring legislation to create the national highway system. He was more cautious in his approach to civil rights; though bolder than his moderate Southern peers, he struggled to adjust to the shifting political ground of the 1960s. His career was defined by his relationship with Lyndon Johnson, whose Vietnam policies Gore bitterly opposed. The injection of Christian perspectives into the state's politics ultimately distanced Gore's worldview from that of his constituents. Altogether, Gore's political rise and fall, Badger argues, illuminates the significance of race, religion, and class in the creation of the modern South.

"Mr. Badger, a British historian of the American New Deal, has an instinctive grasp of American culture and politics."—The Wall Street Journal

"An interesting study filled with useful historical context . . . A British historian fascinated with the American South examines the changes in the region through the political career of Albert Gore Sr. (1907-1998). Badger offers a great deal of information about the U.S. senator from Tennessee-and father of former vice president Al Gore Jr."—Kirkus Reviews

"From the New Deal to the Nixon administration, Albert Gore Sr. of Tennessee played a critical role in the most important political developments of the era. Anthony J. Badger has brought his deft hand to Gore's political life and produced a first-rate biography that should be a must-read for anyone who wants to understand how American politics ended up where it is today."—Journal of American History

"A superb book-imaginatively and exhaustively researched, rich in provocative arguments and original insights, and written with clarity and polish. Anthony J. Badger uses Gore's career to illuminate the development of the modern American South, the transformation of Southern and national politics, and the legislative history of such key measures as the Interstate Highway Act and Medicare."—Joseph Crespino, Emory University

"A sophisticated account of an important figure in the history of Southern politics and modern American liberalism. Anthony J. Badger elucidates particular lines along which liberal politics evolved in the middle decades of the twentieth century and dramatizes the transformation of southern politics during this same time."—Bruce Schulman, Boston University