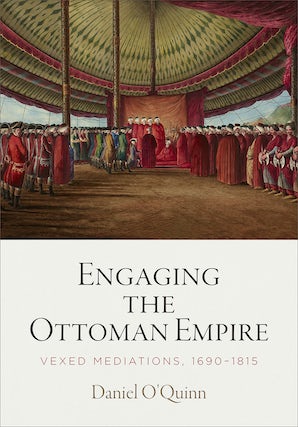 Daniel O'Quinn investigates the complex interpersonal, political, and aesthetic relationships between Europeans and Ottomans in the long eighteenth century. Bookmarking his analysis with the conflict leading to the 1699 Treaty of Karlowitz on one end and the 1815 bid for Greek independence on the other, he follows the fortunes of notable British, Dutch, and French diplomats to the Sublime Porte of the Ottoman Empire as they lived and worked according to the capitulations surrendered to the Sultan.

Closely reading a mixed archive of drawings, maps, letters, dispatches, memoirs, travel narratives, engraved books, paintings, poems, and architecture, O'Quinn demonstrates the extent to which the Ottoman state was not only the subject of historical curiosity in Europe but also a key foil against which Western theories of governance were articulated. Juxtaposing narrative accounts of diplomatic life in Constantinople, such as those contained in the letters of Lady Mary Wortley Montagu, wife of the English ambassador, with visual depictions such as those of the costumes of the Ottoman elite produced by the French-Flemish painter Jean Baptiste Vanmour, he traces the dissemination of European representations and interpretations of the Ottoman Empire throughout eighteenth-century material culture.

In a series of eight interlocking chapters, O'Quinn presents sustained and detailed case studies of particular objects, personalities, and historical contexts, framing intercultural encounters between East and West through a set of key concerns: translation, mediation, sociability, and hospitality. Richly illustrated and provocatively argued, Engaging the Ottoman Empire demonstrates that study of the Ottoman world is vital to understanding European modernity.

PART II. BESIDE WAR
Chapter 5. "As Are Yet to Be Seen": The Dilettanti's Re-enchantment of the Ionian world
Chapter 6. Exoriare Aliquis: Choiseul-Gouffier's Needs and Lady Craven's Desires
Chapter 7. Narrative Fragments and Object Choices: Antiquities, War, and the Vestiges of Love
Chapter 8. Critical Disjunctions: The Intersection of Form, Affect, and Empire in Melling and Byron

"Daniel O’Quinn’s magisterial Engaging the Ottoman Empire illuminates how aesthetic forms and knowledge practices mediate affective, cultural, erotic, and political relations across competing spatial and temporal scales. The book summons a dazzling array of materials— paintings, travel narratives, memoirs, letters, maps, poems, buildings, antiquarian collections— to testify to the complexity of European relations with the Ottoman Empire during the long eighteenth century. The sheer abundance and variety of objects thrust the reader into multifarious timeframes, for the artifacts the book analyzes are composed of materials, techniques, meanings, assumptions, and allusions that belong to multiple moments and that age, die, or become obsolete at different paces."—Studies in Eighteenth-Century Culture

"[B]eautifully written and compellingly argued . . . This book provides fresh ways of thinking about how we might employ a range of Western European sources in understanding their societies' engagements with the Ottoman Empire, and the relationship between local cultures and global pressures."—Modern Philology

"What O'Quinn's book brings to light is the rich and largely unexplored collection of European literary and visual materials produced about the Ottomans that can no longer be ignored by scholars of the long eighteenth century."—Journal of British Studies

"Engaging the Ottoman Empire has the potential to upend so much of what we thought we already knew—about art history, the classics, periodization, media history, European imperialism, and so much more. Its ripple effects will be felt in scholarship on all of these topics for years to come."—Studies in Eighteenth-Century Culture

"Sumptuously produced and illustrated, meticulously edited, and intricately argued, Engaging the Ottoman Empire offers rich rewards to readers who follow its carefully plotted trajectory...[It] sets a new benchmark in Ottoman studies as well as suggesting new approaches to travelogues and visual material relating to the Ottoman World, and it will surely become a key point of reference for all future work in the area."—Nineteenth Century Prose

"Taking a truly interdisciplinary approach, Engaging the Ottoman Empire demonstrates just how prevalent the Near East was in Europe's mediascape and how constitutive it was of European identity. With originality and deftness, Daniel O'Quinn detects subtle disturbances in visual and literary representations that he uses to interrogate larger questions about political contingency, sexual desire, and intercultural mediation. O'Quinn's book is a much needed summa and an incisive work of critical analysis."—Douglas Fordham, University of Virginia

"Engaging the Ottoman Empire is, in its historical rigor, the depth of its archive, and the sophistication of its readings, a monumental achievement. This is true in both a quantitative sense-in the sheer number of objects and texts surveyed-and a qualitative one, in the density of historical excavation and in the openness of the argument to surprise, ambiguity, and contradiction."—David Porter, University of Michigan

"Daniel O'Quinn's great idea is to look at the ways the 'mediascape' in the Christian kingdoms of Europe directly addressed the mediation of relations with the Ottomans. Engaging the Ottoman Empire contains a wonderful set of images that opens up new possibilities for the discussion of European representation of the Ottomans."—Palmira Brummett, University of Tennessee, Knoxville