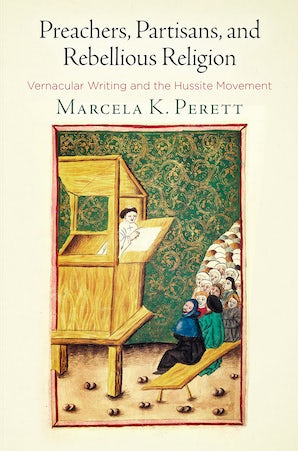 Vernacular Writing and the Hussite Movement

In early fifteenth-century Prague, disagreements about religion came to be shouted in the streets and taught to the laity in the vernacular, giving rise to a new kind of public engagement that would persist into the early modern era and beyond. The reforming followers of Jan Hus brought theological learning to the people through a variety of genres, including songs, poems, tractates, letters, manifestos, and sermons. At the same time, university masters provided the laity with an education that enabled them to discuss contentious issues and arrive at their own conclusions, emphasizing that they held the freedom to make up their own minds about important theological issues. This marketplace of competing religious ideas in the vernacular emerged in Bohemia a full hundred years before the Reformation.

In Preachers, Partisans, and Rebellious Religion, Marcela K. Perett examines the early phases of the so-called Hussite revolution, between 1412, when Jan Hus first radicalized his followers, and 1436, the year of the agreement at the Council of Basel granting papal permission for the ritual practice of the Utraquist, or moderate Hussite, faction to continue. These were years during which the leaders of competing reform movements needed to garner the laity's support and employed the vernacular for that purpose, translating and simplifying basic theological arguments about the Bible, the church's ritual practice, and authority in the church. Perett illustrates that the vernacular discourse, even if it revolved around the same topics, was nothing like the Latin debates on the issues, often appealing to emotion rather than doctrinal positions. In the end, as Preachers, Partisans, and Rebellious Religion demonstrates, the process of vernacularization increased rather than decreased religious factionalism and radicalism as agreement about theological issues became impossible.

Introduction
Chapter 1. From Golden Boy to Rabble-Rouser: Jan Hus and His Preaching Career
Chapter 2. Creating a Faction: Jan Hus and the Importance of Moral Victory
Chapter 3. Battle for the Minds: Vernacular Propaganda For and Against Hussite Reform
Chapter 4. The Parting of the Ways: Prague and Tábor
Chapter 5. Combining Education with Polemic: The Price of Theology in the Vernacular
Chapter 6. The Dangers of Popularizing Wyclif: The Eucharistic Debates That Fragmented Bohemia
Chapter 7. Writing History to Shape the Future: Historia Hussitica by Lawrence of Březová and Historia Bohemica by Aeneas Silvius Piccolomini
Conclusion

"Perett's book is one of the best attempts to present the reformatory disputes in early fifteenth-century Bohemia. Transparent, competent, and interesting, it should be one of the first works recommended to those interested in the period. For expert researchers of Hussitism, it will be an inspiring look at the problems with which they already are familiar, furthering our understanding of the communication of theological ideas with laymen during this tumultuous period."—Speculum

"Preachers, Partisans, and Rebellious Religion is a superb text for expanding one's understanding of the vibrant and complex world of Bohemian religious thought in the fifteenth century. Perhaps what is most valuable in Perett's work is how she decisively shows that the transmission of theological and philosophical arguments came to truly matter to the people of fifteenth-century Bohemia beyond the discussions of the elite. I highly recommend this work as a valuable piece of the fascinating puzzle that is the Hussite period."—Austrian History Yearbook

"Marcela K. Perett rightly points out that most scholarship on the Hussite Revolution focuses on the clerical leadership of the movement and its attempts to communicate their political and theological messages to their opponents. Preachers, Partisans, and Rebellious Religion offers a welcome correction and complement by taking seriously how the clerical elite adapted their message through translation into the vernacular in order to persuade the laity to adopt certain positions and behaviors."—Phillip Nelson Haberkern, Boston University