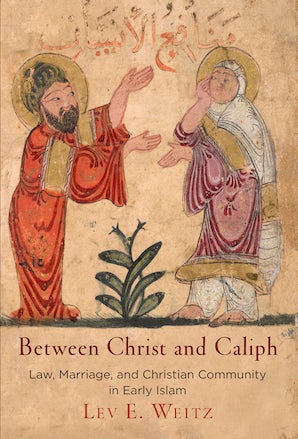 Between Christ and Caliph

In the conventional historical narrative, the medieval Middle East was composed of autonomous religious traditions, each with distinct doctrines, rituals, and institutions. Outside the world of theology, however, and beyond the walls of the mosque or the church, the multireligious social order of the medieval Islamic empire was complex and dynamic. Peoples of different faiths—Sunnis, Shiites, Christians, Jews, and others—interacted with each other in city streets, marketplaces, and even shared households, all under the rule of the Islamic caliphate. Laypeople of different confessions marked their religious belonging through fluctuating, sometimes overlapping, social norms and practices.

In Between Christ and Caliph, Lev E. Weitz examines the multiconfessional society of early Islam through the lens of shifting marital practices of Syriac Christian communities. In response to the growth of Islamic law and governance in the seventh through tenth centuries, Syriac Christian bishops created new laws to regulate marriage, inheritance, and family life. The bishops banned polygamy, required that Christian marriages be blessed by priests, and restricted marriage between cousins, seeking ultimately to distinguish Christian social patterns from those of Muslims and Jews. Through meticulous research into rarely consulted Syriac and Arabic sources, Weitz traces the ways in which Syriac Christians strove to identify themselves as a community apart while still maintaining a place in the Islamic social order. By binding household life to religious identity, Syriac Christians developed the social distinctions between religious communities that came to define the medieval Islamic Middle East. Ultimately, Between Christ and Caliph argues that interreligious negotiations such as these lie at the heart of the history of the medieval Islamic empire.

Weitz’s masterful and incisive study of the development of Christian 'family law' challenges the 'standard narrative' of the development of classical forms of Islamic tradition...Weitz’s work is a very beneficial reminder of the rich religious, linguistic, and ethnic diversity of the medieval Islamic world, as it brings into view the non-Muslim majority of early Islamicate lands.

"Weitz' work is an important contribution to the discussion of Christianity under Islamic rule and the interaction between traditions. He clearly demonstrates that Christian rules and norms were not static nor entirely insulated from Muslim influences. His recognition that the transition to Islamic imperial rule presented opportunities for Christian leaders to extend their influence and consolidate their communities is especially important."—Catholic Historical Review

"Between Christ and Caliph [is] a complete book, significant for both Christians and Muslims, in recognition of their mutual influence over traditions, civilizations and cultural activities. [E]nthusiastically recommend[ed] for the vivid interreligious negotiations occurring from the Middle Ages until nowadays that it presents."—The Medieval Review

"Between Christ and Caliph strives to exemplify how the study of non-Muslim communities should be integrated into the study of Islamic history, and it suggests how our understanding of Islamic politics, society, and culture is missing a historically relevant dynamism if non-Muslim communities are assumed to function autonomously."—Janina Safran, Pennsylvania State University

"Between Christ and Caliph contains the most complete presentation of the historical development of the Syriac Christian legal tradition that I have ever seen. It is an important contribution to the legal and social history of the early Islamic period in the Middle East."—Michael Morony, University of California, Los Angeles