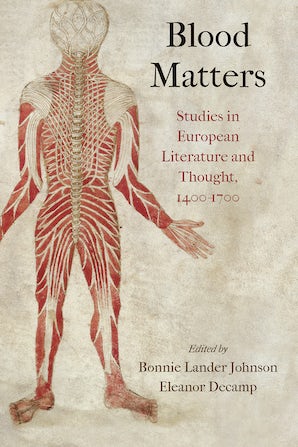 Studies in European Literature and Thought, 14-17

In late medieval and early modern Europe, definitions of blood in medical writing were slippery and changeable: blood was at once the red fluid in human veins, a humor, a substance governing crucial Galenic models of bodily change, a waste product, a cause of corruption, a source of life, a medical cure, a serum appearing under the guise of all other bodily secretions, and—after William Harvey's discovery of its circulation—the cause of one of the greatest medical controversies of the premodern period. Figurative uses of "blood" are even more difficult to pin down. The term appeared in almost every sphere of life and thought, running through political, theological, and familial discourses.

Blood Matters explores blood as a distinct category of inquiry and draws together scholars who might not otherwise be in conversation. Theatrical and medical practice are found to converge in their approaches to the regulation of blood as a source of identity and truth; medieval civic life intersects with seventeenth-century science and philosophy; the concepts of class, race, gender, and sexuality find in the language of blood as many mechanisms for differentiation as for homogeneity; and fields as disparate as pedagogical theory, alchemy, phlebotomy, wet-nursing, and wine production emerge as historically and intellectually analogous. The volume's essays are organized within categories derived from medieval and early modern understanding of blood behaviors—Circulation, Wounds, Corruption, Proof, and Signs and Substances—thereby providing the terms through which interdisciplinary and cross-period conversations can take place.

I. CIRCULATION
Chapter 1. Was the Heart "Dethroned"?: Harvey's Discoveries and the Politics of Blood, Heart, and Circulation
—Margaret Healy
Chapter 2. "The Lake of my Heart": Blood, Containment, and the Boundaries of the Person in the Writing of Dante and Catherine of Siena
—Heather Webb
Chapter 3. Sorting Pistol's Blood: Social Class and the Circulation of Character in Shakespeare's 2 Henry IV and Henry V
—Katharine Craik

"A powerful and coherent collection of essays that illuminates the various facets of a fascinating subject. It greatly enriches our sense of the meanings of blood and will have a major impact in medieval and Renaissance studies."—Michael Schoenfeldt, University of Michigan