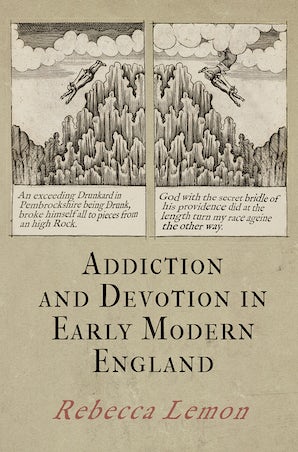 Rebecca Lemon illuminates a previously-buried conception of addiction, as a form of devotion at once laudable, difficult, and extraordinary, that has been concealed by the persistent modern link of addiction to pathology. Surveying sixteenth-century invocations, she reveals how early moderns might consider themselves addicted to study, friendship, love, or God. However, she also uncovers their understanding of addiction as a form of compulsion that resonates with modern scientific definitions. Specifically, early modern medical tracts, legal rulings, and religious polemic stressed the dangers of addiction to alcohol in terms of disease, compulsion, and enslavement. Yet the relationship between these two understandings of addiction was not simply oppositional, for what unites these discourses is a shared emphasis on addiction as the overthrow of the will.

Etymologically, "addiction" is a verbal contract or a pledge, and even as sixteenth-century audiences actively embraced addiction to God and love, writers warned against commitment to improper forms of addiction, and the term became increasingly associated with disease and tyranny. Examining canonical texts including Doctor Faustus, Twelfth Night, Henry IV, and Othello alongside theological, medical, imaginative, and legal writings, Lemon traces the variety of early modern addictive attachments. Although contemporary notions of addiction seem to bear little resemblance to its initial meanings, Lemon argues that the early modern period's understanding of addiction is relevant to our modern conceptions of, and debates about, the phenomenon.

"Addiction and Devotion performs valuable scholarly work by recovering a lost history of addiction, and illuminating a wide range of cultural attitudes both towards specific addictive practices and towards different forms of addiction as determined by the relationship of the addict to their object."—Renaissance and Reformation

"Rebecca Lemon presents a compelling, richly substantiated treatment of early modern cultures of addiction that offers genuinely new perspectives. Charting the development of the modern sense of addiction while at the same time attending to its early modern senses as something laudable, even heroic, Addiction and Devotion in Early Modern England is an important intervention."—Adam Smyth, University of Oxford