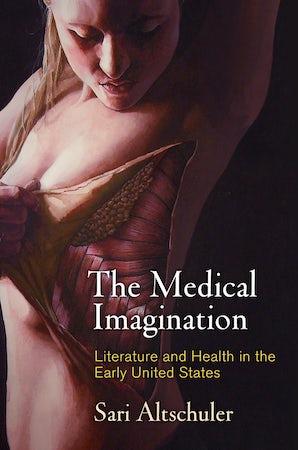 Literature and Health in the Early United States

In 1872, Ralph Waldo Emerson wrote, "Science does not know its debt to imagination," words that still ring true in the worlds of health and health care today. The checklists and clinical algorithms of modern medicine leave little space for imagination, and yet we depend on creativity and ingenuity for the advancement of medicine—to diagnose unusual conditions, to innovate treatment, and to make groundbreaking discoveries. We know a great deal about the empirical aspects of medicine, but we know far less about what the medical imagination is, what it does, how it works, or how we might train it.

In The Medical Imagination, Sari Altschuler argues that this was not always so. During the eighteenth and nineteenth centuries, doctors understood the imagination to be directly connected to health, intimately involved in healing, and central to medical discovery. In fact, for physicians and other health writers in the early United States, literature provided important forms for crafting, testing, and implementing theories of health. Reading and writing poetry trained judgment, cultivated inventiveness, sharpened observation, and supplied evidence for medical research, while novels and short stories offered new perspectives and sites for experimenting with original medical theories.

Such imaginative experimentation became most visible at moments of crisis or novelty in American medicine, such as the 1790s yellow fever epidemics, the global cholera pandemics, and the discovery of anesthesia, when conventional wisdom and standard practice failed to produce satisfying answers to pressing questions. Throughout the eighteenth and nineteenth centuries, health research and practice relied on a broader complex of knowing, in which imagination often worked with and alongside observation, experience, and empirical research. In reframing the historical relationship between literature and health, The Medical Imagination provides a usable past for contemporary conversations about the role of the imagination—and the humanities more broadly—in health research and practice today.

"The Medical Imagination is a thorough, deeply researched investigation into the role of literature in medical knowledge from Benjamin Rush at the end of the eighteenth century to Oliver Wendell Holmes and S. Weir Mitchell before the Civil War . . . Altschuler brings new works into the well-established field of literature and medicine and fresh insights to oft-studied works . . . a major contribution to historical and literary studies."—Journal of American History

"In this impressive book, Altschuler exemplifies the kind of critical and 'creative analytical thinking' that great thinkers have used to synthesise trends and concepts from a variety of disciplines. In doing so, she models the kind of interdisciplinary-and, yes, imaginative-approach to health and health care that is needed to revolutionise a fragmented system today."—Social History of Medicine

"In this ground-breaking work of historical research and reframing, Sari Altschuler foregrounds the central role of the imagination in the production of medical knowledge in nineteenth-century America."—Nineteenth-Century Literature

"The Medical Imagination is an impressively interdisciplinary work . . . The questions that the book raises about the past and present intersections of medicine and literature and the potential of interdisciplinary study are fascinating and pressing."—The Junto

"The Medical Imagination is an extraordinary intervention in the fields of the medical humanities, American literary studies, and American social and cultural history. Sari Altschuler has mastered and synthesized a large body of research, which she delivers with panache and passion. This multidisciplinary book puts her on the front lines of current scholarly discourse, teaching us the lesson that both medical history and literary history are the poorer for ignoring each other."—Laura Dassow Walls, University of Notre Dame

"This elegant, deeply researched, and original study engages the recent critical turn toward the intersection of literature and science, but what's more, it manifests the very synergy of humanism and factuality that it takes as its subject. Readers will find themselves equally drawn to the excitements of literary performance and the operating theater, and will be absorbed by complex work of the doctor-poets who plumbed the persistent mysteries of the human body."—Kathleen Donegan, University of California, Berkeley