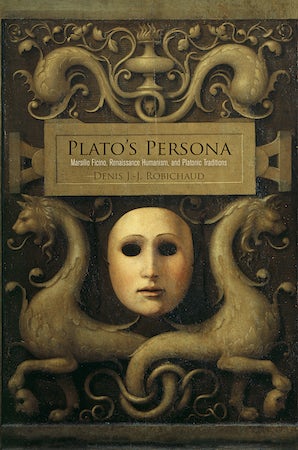 In 1484, humanist philosopher and theologian Marsilio Ficino published the first complete Latin translation of Plato's extant works. Students of Plato now had access to the entire range of the dialogues, which revealed to Renaissance audiences the rich ancient landscape of myths, allegories, philosophical arguments, etymologies, fragments of poetry, other works of philosophy, aspects of ancient pagan religious practices, concepts of mathematics and natural philosophy, and the dialogic nature of the Platonic corpus's interlocutors. By and large, Renaissance readers in the Latin West encountered Plato's text through Ficino's translations and interpretation.

In Plato's Persona, Denis J.-J. Robichaud provides the first synthetic study of Ficino's interpretation of the Platonic corpus. Robichaud analyzes Plato's works in their original Greek and in Ficino's Latin translations, as well as Ficino's non-Platonic writings and correspondence, in the process uncovering new aspects of Ficino's intellectual work habits. In his letters and works, Ficino self-consciously imitated a Platonic style of prose, in effect devising a persona for himself as a Platonic philosopher. Plato's dialogues are populated with a wealth of literary characters with whom Plato interacts and against whom Plato refines his own philosophies. Reading through Ficino's translations, Robichaud finds that the Renaissance philosopher seeks an understanding of Plato's persona(e) among all the dialogues' interlocutors. In effect, Ficino assumed the role of Plato's Latin spokesperson in the Renaissance.

Plato's Persona is grounded in an extensive study of scholarship in Renaissance humanism, classics, philosophy, and intellectual history, and contextualizes Ficino's intellectual achievements within the contemporary Christian orthodox view of Platonism. Ficino was an influential figure in the early Italian Renaissance: the key intermediary between Greek and Latin, and between manuscript and print, giving voice to Plato and access to the ancient frameworks needed to interpret his dialogues.

"With an enviable erudition and a superb command of printed and manuscript sources, as well as of the rhetorical tradition, Robichaud's book has enriched this already impressive tradition of Ficino scholarship. A mere glance into the index locorum of the book reveals the scope of Robichaud's research. Plato's Persona is an important and timely contribution to our understanding of Ficino's work; the book has enormous potential to engender new scholarship on Renaissance Platonism and its cultural environment in general. It is a must-read for any specialist in the field, because its author substantially enhances our sensitivity to Ficino's approach to Platonism in some crucial, but hitherto rather neglected, aspects."—Journal of the History of Philosophy

"Well documented and nicely written, this volume is a fine contribution to our understanding of the history of Platonism as well as to our grasp of the contributions of Marsilio Ficinio to Renaissance humanism. It is a model for how to conjoin research into the history of thought with an active engagement of philosophical questions."—International Philosophical Quarterly

"In Plato's Persona, Robichaud takes his place alongside Chastel, Kristeller, and Allen as one of the new generation's leading Ficino specialists. He does this by attempting something that has not been done before, 'writing a single volume analyzing Ficino's hermeneutics for understanding the Platonic corpus as a whole . . . ' Plato's Persona is a work of serious scholarship that gives us a Ficino for our time.""—Neo-Latin News

"In Plato's Persona, Denis Robichaud studies Italian Renaissance philosopher Marsilio Ficino's writings with the keen eye and skills of a multilingual classical philologist, yet also through the broad perspective of an intellectual historian. Noting that Ficino is usually read for his scholarly contributions rather than his rhetorical skills, Robichaud aptly employs that additional lens to highlight the Italian philosopher's importance for both intellectual and creative letters. The result is an impressive study that elucidates the surprisingly poetic aspects of Ficino's thought and practices."—Bulletin of the Comediantes

"The breadth of sources which Robichaud analyses in detail and in their original languages is remarkable… Robichaud’s sensitivity to various literary forms, his rhetorical ingenuity and his detailed, as well as imaginative, analyses of manuscripts, including their paratexts, makes this book as valuable for literary scholars as it is for historians of philosophy. Both will also embrace Robichaud’s compelling account of Ficino and his engagement with the Platonic corpus."—International Journal of the Classical Tradition

"Plato's Persona is a valuable contribution to our understanding of Ficino and his complex engagement both with Plato and the Pythagoreans and with Augustine and the later Neoplatonists."—Michael J. B. Allen, University of California, Los Angeles

"Plato's Persona contains much new information on Ficino's self-conception as a philosopher and on his approach to understanding Plato. I am impressed by Robichaud's control of the literature, ancient and modern, and the linguistic range it demonstrates."—John Monfasani, University at Albany, State University of New York