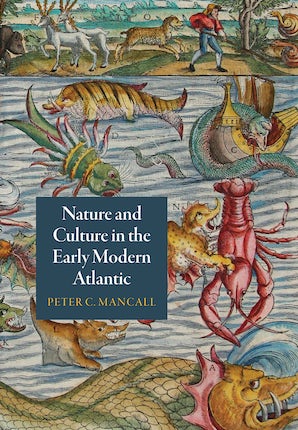 Nature and Culture in the Early Modern Atlantic

In the sixteenth-century Atlantic world, nature and culture swirled in people's minds to produce fantastic images. In the South of France, a cloister's painted wooden panels greeted parishioners with vivid depictions of unicorns, dragons, and centaurs, while Mayans in the Yucatan created openings to buildings that resembled a fierce animal's jaws, known to archaeologists as serpent-column portals.

In Nature and Culture in the Early Modern Atlantic, historian Peter C. Mancall reveals how Europeans and Native Americans thought about a natural world undergoing rapid change in the century following the historic voyages of Christopher Columbus. Through innovative use of oral history and folklore maintained for centuries by Native Americans, as well as original use of spectacular manuscript atlases, paintings that depict on-the-spot European representations of nature, and texts that circulated imperfectly across the ocean, he reveals how the encounter between the old world and the new changed the fate of millions of individuals.

This inspired work of Atlantic, European, and American history begins with medieval concepts of nature and ends in an age when the printed book became the primary avenue for the dissemination of scientific information. Throughout the sixteenth century, the borders between the natural world and the supernatural were more porous than modern readers might realize. Native Americans and Europeans alike thought about monsters, spirits, and insects in considerable depth. In Mancall's vivid narrative, the modern world emerged as a result of the myriad encounters between peoples who inhabited the Atlantic basin in this period. The centuries that followed can be comprehended only by exploring how culture in its many forms—stories, paintings, books—shaped human understanding of the natural world.

Preface
Chapter 1. The Boundaries of Nature
Chapter 2. A New Ecology
Chapter 3. The Landscape of History
Postscript. The Theater of Insects

"In Nature and Culture in the Early Modern Atlantic, Peter Mancall offers a brief, elegant account of the environmental understandings of both the Europeans who came to settle and exploit the resources of North America and the Caribbean, and the native groups who were already doing those things. . . . The book features illustrations large enough to reward examination, underlining their role as integral components of the argument."—Times Literary Supplement

"How to research indigenous culture in pre-modern America is a perennial challenge, given the nature of that society and the records that historians conventionally use. Mancall makes the case for visual material, oral history and legend as recorded in antiquarian sources in order to break the hold of the Western historical tradition. . . . Like some of the maps that it studies, Mancall's book charts the possibilities of what those new encounters with Atlantic history might be."—English Historical Review

"Mancall draws mainly from the Anglophone scientific tradition, in which knowledge about Spanish and Portuguese documents of the sixteenth century is still quite exceptional. His book reads like a companion, accessible to an audience beyond specialized scholars . . . Mancall suggests with this well-documented and wonderfully illustrated study that Europeans and indigenous Americans started from similar points of view in the past-which implies that, from a global perspective, the culture of the Enlightenment did more to broaden the distance than to advocate for a better understanding of their mutual specifics."—Isis

"In recent years an active research topic on the early modern era has been the intersection of human beings and the natural world. From all sides have come significant works investigating the science of describing natural history and the invention of exoticism and the endemic or the indigenous. Nature and Culture in the Early Modern Atlantic explores the natural world as conceived in the sixteenth-century Atlantic basin. With footings in both history and anthropology, Peter C. Mancall is well positioned to plumb the topic . . . [and the book] delights as it enlightens at every turn."—Journal of Southern History

"[A] graceful and sumptuously illustrated collection of essays exploring the cultural impact of encounters with American habitats and inhabitants on early modern European ideas about nature . . . [T]he book draws on a rich corpus of images and the author's deep familiarity with European visual culture to consider how the nature of the New World sometimes echoed and sometimes challenged European knowledge about the environment and even the nature of that knowledge itself."—Envorinmental History

"Through a wide-ranging series of case studies, this book weaves a compelling narrative of visual, cultural, and ecological exchange in the early modern Atlantic world . . . The use of oral history and folklore helps to develop a broad perspective on early encounters in the Atlantic basin, expanding upon previous scholarly explorations of the subject that do not always pay such close attention to these types of sources."—Winterthur Portfolio

"Brilliantly illustrated and written with flashes of wit and humor, Nature and Culture in the Early Modern Atlantic traces the shift in people's thinking about nature from the medieval to the modern period. Peter C. Mancall brings his encyclopedic knowledge of the primary and secondary sources to bear on monsters, insects, tropical forests, and indigenous peoples and shows that a new fascination with the material spectacle of the New World contributed to secular explanations of natural phenomena."—Donald Worster, author of Shrinking the Earth: The Rise and Decline of American Abundance

"Peter C. Mancall's Nature and Culture in the Early Modern Atlantic introduces the reader to a wondrous variety of ways that individuals, both individually and collectively, attempted to view and conceptualize the early modern Atlantic ecological world, from insects to maps and from imagined monsters to actual peoples. Abundantly illustrated, it is a tour de force of creative synthesis, engagingly drawing us into an era marked by a complex meeting of beliefs and ideas, and setting the stage for the intellectual traditions that would follow in its wake."—Joanne Pillsbury, The Metropolitan Museum of Art

"In this compact, learned, and beautifully illustrated book, Mancall probes a wide array of written, oral and art historical sources on the real and imagined flora and fauna of the Americas in the sixteenth century, examining everything from monsters to mosquitoes. He shows in exquisite detail how the integration of the Atlantic world unsettled sensibilities toward nature."—J. R. McNeill, author of Mosquito Empires: Ecology and War in the Greater Caribbean, 1640-1914