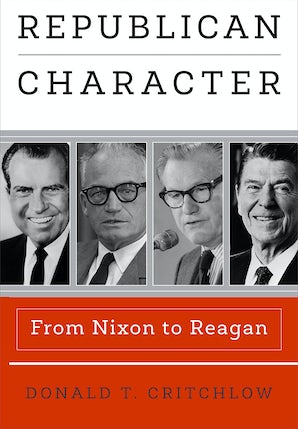 From Nixon to Reagan

"Politics makes for strange bedfellows," the old saying goes. Americans, however, often forget the obvious lesson underlying this adage: politics is about winning elections and governing once in office. Voters of all stripes seem put off by the rough-and-tumble horse-trading and deal-making of politics, viewing its practitioners as self-serving and without principle or conviction.

Because of these perspectives, the scholarly and popular narrative of American politics has come to focus on ideology over all else. But as Donald T. Critchlow demonstrates in his riveting new book, this obsession obscures the important role of temperament, character, and leadership ability in political success. Critchlow looks at four leading Republican presidential contenders—Richard Nixon, Nelson Rockefeller, Barry Goldwater, and Ronald Reagan—to show that, behind the scenes, ideology mattered less than principled pragmatism and the ability to build coalitions toward electoral and legislative victory.

Drawing on new archival material, Critchlow lifts the curtain on the lives of these political rivals and what went on behind the scenes of their campaigns. He reveals unusual relationships between these men: Nixon making deals with Rockefeller, while Rockefeller courted Goldwater and Reagan, who themselves became political rivals despite their shared conservatism. The result is a book sure to fascinate anyone wondering what it takes to win the presidency of the United States—and to govern effectively.

Epilogue. Voters and Leaders in Disarray

"Donald Critchlow has written a book called Republican Character at a time when the phrase sounds almost loaded. A year into Donald Trump's presidency, the topic of his perceived character defects and what voters ought to make of them has been endlessly canvassed. Happily, Critchlow, a professor at Arizona State University, is a political historian, not a pundit, and his slim volume is not an entry in that debate (though it is far from irrelevant to it). It is a compact and illuminating history of four Republicans who pursued the presidency in the latter half of the 20th century: Richard Nixon, Nelson Rockefeller, Barry Goldwater, and Ronald Reagan . . . [Critchlow] wants to show, through the intertwined biographies of these four men, that character is critically important to political success (or failure)."—The American Prospect

"An original, evenhanded character study of Barry Goldwater, Richard Nixon, Ronald Reagan, and Nelson Rockefeller, four political rivals who dominated the Republican Party in the late 20th century. . . . While acknowledging that ideological litmus tests often count more than character and temperament in the current political climate, this readable history offers shrewd insights into the disposition of national leaders then and now."—Publishers Weekly

"Given the lack of civility and of political flexibility in Washington today, readers interested in the nature of political character and its relation to American democracy would do well to pick up Republican Character."—Origins

"Donald T. Critchlow has written an insightful, provocative volume about how the clashes-and sometime cooperation-between Richard Nixon, Nelson Rockefeller, Barry Goldwater, and Ronald Reagan shaped the modern Republican Party. The figures who emerge from this fine work are constantly maneuvering, adjusting to fresh political realities, and dealing with new issues thrown their way. By making these competitors human beings, driven by ambition and pragmatic instincts informed by principled convictions, Critchlow reveals these leaders as more nuanced and hence more interesting."—Karl Rove, author of The Triumph of William McKinley