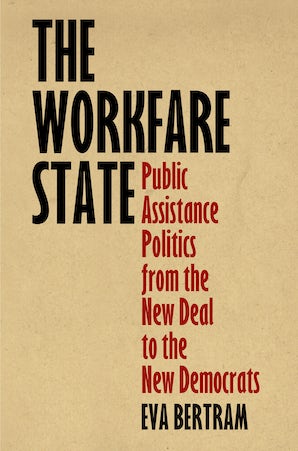 Public Assistance Politics from the New Deal to the New Democrats

In the Great Recession of 2007-2009, the United States suffered the most sustained and extensive wave of job destruction since the Great Depression. When families in need sought help from the safety net, however, they found themselves trapped in a system that increasingly tied public assistance to private employment. In The Workfare State, Eva Bertram recounts the compelling history of the evolving social contract from the New Deal to the present to show how a need-based entitlement was replaced with a work-conditioned safety net, heightening the economic vulnerability of many poor families.

The Workfare State challenges the conventional understanding of the development of modern public assistance policy. New Deal and Great Society Democrats expanded federal assistance from the 1930s to the 1960s, according to the standard account. After the 1980 election, the tide turned and Republicans ushered in a new conservative era in welfare politics. Bertram argues that the decisive political struggles took place in the 1960s and 1970s, when Southern Democrats in Congress sought to redefine the purposes of public assistance in ways that would preserve their region's political, economic, and racial order. She tells the story of how the South—the region with the nation's highest levels of poverty and inequality and least generous social welfare policies—won the fight to rewrite America's antipoverty policy in the decades between the Great Society and the 1996 welfare reform. Their successes provided the foundation for leaders in both parties to build the contemporary workfare state—just as deindustrialization and global economic competition made low-wage jobs less effective at providing income security and mobility.

"Bertram offers a compelling account of the politics surrounding the transformation of the welfare state into a 'workfare state' or one that links public assistance to work activity among the poor. . . . A richly detailed analysis of formative moments in welfare policy-making."—Journal of Children and Poverty

"The Workfare State provides a thoughtful and cogent analysis, and an incisive and sobering reminder that a two-tiered system of social provision is a core legacy of the Democratic Party."—Perspectives on Politics

"Bertram has given us a major work that presents a compelling reinterpretation of the history of public assistance policies in the US. All scholars who are interested in policy, politics, and poverty should read this book carefully; it is an essential guide to our present moment."—Economic History Review

"How did the United States end up with a safety net that no longer protects its people? Eva Bertram's superb analysis explains precisely how the United States reconstructed (and restricted) its welfare state. The Workfare State provides a fresh look at the Democrats, the South, inequality, social justice, and more. Broad ranging, urgent, thoughtful, elegant, meticulously researched, and highly recommended."—James A. Morone, Director, Taubman Center for Public Policy at Brown University

"The Workfare State is a fascinating and essential new account of the rise of work as a condition for social assistance in the United States. Work became a requirement for social assistance, reinforcing the low-wage economy of the South and in turn the political bases of the lawmakers responsible for the change. That the same forces that shaped welfare legislation in the 1930s continued to do so decades later, and for similar economic and racial reasons, is disturbing. That welfare recipients were thrust into work just as deindustrialization and globalization undermined the low-wage sector is heartbreaking. A new must-read in the development of American social policy."—Andrea Louise Campbell, Massachusetts Institute of Technology

"In this compelling new interpretation, Eva Bertram shows how the emergence of the new South-with its low-wage racialized economy-brought with it pressures to redraw the social contract between poor families and the state well before Republicans came to political power in the 1980s. Rather than mitigate new labor market insecurities, politicians compounded them by linking assistance to employment. The Workfare State is essential reading for understanding the politics and policies that now confront poor Americans."—Margaret M. Weir, University of California, Berkeley