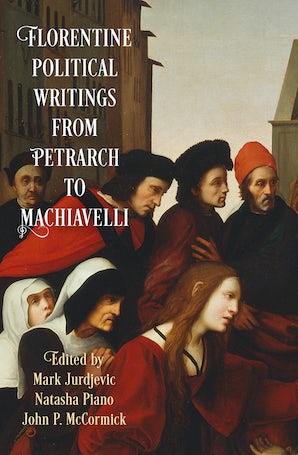 In the fifteenth-century republic of Florence, political power resided in the hands of middle-class merchants, a few wealthy families, and powerful craftsmen's guilds. The intensity of Florentine factionalism and the frequent alterations in its political institutions gave Renaissance thinkers ample opportunities to inquire into the nature of political legitimacy and the relationship between authority and its social context.

This volume provides a selection of texts that describes the language, conceptual vocabulary, and issues at stake in Florentine political culture at key moments in its development during the Renaissance. Rather than presenting Renaissance political thought as a static set of arguments, Florentine Political Writings from Petrarch to Machiavelli instead illustrates the degree to which political thought in the Italian City revolved around a common cluster of topics that were continually modified and revised—and the way those common topics could be made to serve radically divergent political purposes.

Editors Mark Jurdjevic, Natasha Piano, and John P. McCormick offer readers the opportunity to appreciate how Renaissance political thought, often expressed in the language of classical idealism, could be productively applied to pressing civic questions. The editors expand the scope of Florentine humanist political writing by explicitly connecting it with the sixteenth-century realist turn most influentially exemplified by Niccolò Machiavelli and Francesco Guicciardini. Presenting nineteen primary source documents, including lesser known texts by Machiavelli and Guicciardini, several of which are here translated into English for the first time, this useful compendium shows how the Renaissance political imagination could be deployed to think through methods of electoral technology, the balance of power between different social groups, and other practical matters of political stability.

PART I. ON MONARCHY AND TYRANNY
Chapter 1. Petrarch
How a Ruler Ought to Govern His State (1373)
Chapter 2. Coluccio Salutati
On the Tyrant(1400)
Chapter 3. Bartolus of Sassoferrato
On Tyranny (c. 1355)

PART II. ON CIVIC REPUBLICANISM
Chapter 4. Leonardo Bruni
Panegyric to the City of Florence (c. 1402) Oration for the Funeral of Nanni Strozzi (1428) On the Florentine Constitution (1439)
Chapter 5. Poggio Bracciolini
In Praise of the Venetian Government (1459)
Chapter 6. Alamanno Rinuccini
Liberty (1479)
Chapter 7. Girolamo Savonarola
Treatise on the Constitution and Government of the City of Florence (1498)

PART III. ON FLORENCE BETWEEN REPUBLIC AND PRINCIPATE
Chapter 8. Paolo Vettori
Memorandum to Cardinal de' Medici About the Affairs of Florence (1512)
Chapter 9. Niccolò Machiavelli
Memorandum to the Newly Restored Medici (1512)
Discursus on Florentine Matters After the Death of Lorenzo de' Medici the Younger (1520)
Minutes of a Provision for the Reform of the Florentine Government (1522)
Memorandum to Cardinal Giulio on the Reform of the State of Florence (1522)
Summary of the Affairs of the City of Lucca (1520)
Chapter 10. Francesco Guicciardini
On the Method of Electing Offices in the Great Council (1512)
On the Mode of Reordering the Popular Government (1512)
The Government of Florence after the Medici Restoration (1513)
On the Mode of Securing the State of the House of Medici (1516)

"Mark Jurdjevic, Natasha Piano, and John P. McCormick, have produced an excellent collection that brings together Florentine political writings from the Renaissance of importance to Florence and beyond...The Introduction and selections in this volume increase our understanding of Florence and politics."—Renaissance and Reformation

"With its masterful introductions and accessible translations, Florentine Political Writings from Petrarch to Machiavelli will serve as the standard reference for scholars and teachers of Renaissance Italy and premodern political thought."—Nicholas Scott Baker, Macquarie University