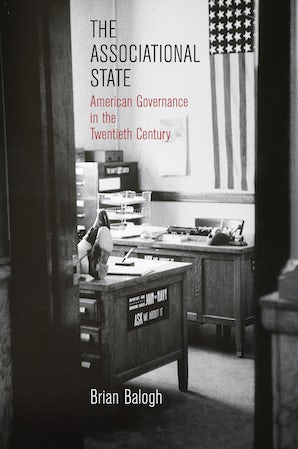 American Governance in the Twentieth Century

In the wake of the New Deal, U.S. politics has been popularly imagined as an ongoing conflict between small-government conservatives and big-government liberals. In practice, narratives of left versus right or government versus the people do not begin to capture the dynamic ways Americans pursue civic goals while protecting individual freedoms. Brian Balogh proposes a new view of U.S. politics that illuminates how public and private actors collaborate to achieve collective goals. This "associational synthesis" treats the relationship between state and civil society as fluid and challenges interpretations that map the trajectory of American politics solely along ideological lines. Rather, both liberals and conservatives have extended the authority of the state but have done so most successfully when state action is mediated through nongovernmental institutions, such as universities, corporations, interest groups, and other voluntary organizations.

The Associational State provides a fresh perspective on the crucial role that the private sector, trade associations, and professional organizations have played in implementing public policies from the late nineteenth through the twenty-first century. Balogh examines key historical periods through the lens of political development, paying particular attention to the ways government, social movements, and intermediary institutions have organized support and resources to achieve public ends. Exposing the gap between the ideological rhetoric that both parties deploy today and their far less ideologically driven behavior over the past century and a half, The Associational State offers one solution to the partisan gridlock that currently grips the nation.

Introduction. Toward an Associational Synthesis
Chapter 1. The Enduring Legacy of Nineteenth-Century Governance in the United States: The Emergence of the Associational Order
Chapter 2. Scientific Forestry and the Roots of the Modern American State: Gifford Pinchot's Path to Progressive Reform
Chapter 3. "Mirrors of Desires": Interest Groups, Elections, and the Targeted Style in Twentieth-Century America
Chapter 4. Reorganizing the Organizational Synthesis: Federal-Professional Relations in Modern America
Chapter 5. Meeting the State Halfway: Governing America, 1930-1950
Chapter 6. Making Pluralism "Great": Beyond a Recycled History of the Great Society
Conclusion. How We Got Here

"A compelling and novel portrait of American political development. Balogh contends that a different and powerful reading of American political history can be developed by focusing on the organization of relationships between the state and society."—Elizabeth Clemens, author of The People's Lobby: Organizational Innovation and the Rise of Interest Group Politics in the United States

"A distinctive analysis of the growth of American government in the twentieth century, building its many insights on a commanding synthesis of American political development and the new political history."—James Sparrow, author of Warfare State: World War II Americans and the Age of Big Government