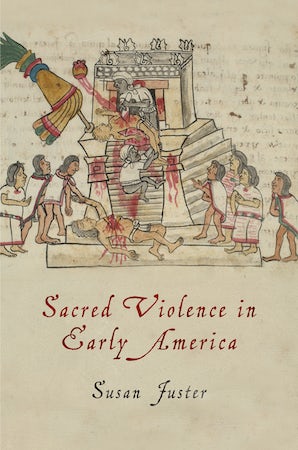 Sacred Violence in Early America offers a sweeping reinterpretation of the violence endemic to seventeenth-century English colonization by reexamining some of the key moments of cultural and religious encounter in North America. Susan Juster explores different forms of sacred violence—blood sacrifice, holy war, malediction, and iconoclasm—to uncover how European traditions of ritual violence developed during the wars of the Reformation were introduced and ultimately transformed in the New World.

Juster's central argument concerns the rethinking of the relationship between the material and the spiritual worlds that began with the Reformation and reached perhaps its fullest expression on the margins of empire. The Reformation transformed the Christian landscape from an environment rich in sounds, smells, images, and tactile encounters, both divine and human, to an austere space of scriptural contemplation and prayer. When English colonists encountered the gods and rituals of the New World, they were forced to confront the unresolved tensions between the material and spiritual within their own religious practice. Accounts of native cannibalism, for instance, prompted uneasy comparisons with the ongoing debate among Reformers about whether Christ was bodily present in the communion wafer.

Sacred Violence in Early America reveals the Old World antecedents of the burning of native bodies and texts during the seventeenth-century wars of extermination, the prosecution of heretics and blasphemers in colonial courts, and the destruction of chapels and mission towns up and down the North American seaboard. At the heart of the book is an analysis of "theologies of violence" that gave conceptual and emotional shape to English colonists' efforts to construct a New World sanctuary in the face of enemies both familiar and strange: blood sacrifice, sacramentalism, legal and philosophical notions of just and holy war, malediction, the contest between "living" and "dead" images in Christian idology, and iconoclasm.

"A 'new America' or an America inheriting a version of Christianity that sanctioned the violence of holy war and the imperative of eliminating idolatry? In Susan Juster's fresh and intelligent retelling of our seventeenth-century beginnings, she uncovers what the rest of us have overlooked, themes of this kind that the colonists brought with them. A feat of research and argument."—David D. Hall, Harvard University

"Sacred Violence in Early America is a marvelously sophisticated, energetic, and especially learned integration of European and American history on a tragically vexed subject. Susan Juster explores not just the 'background' notions about violence and its religious content but vividly demonstrates their often devastating transatlantic relationships up to the American Revolution."—Jon Butler, Yale University