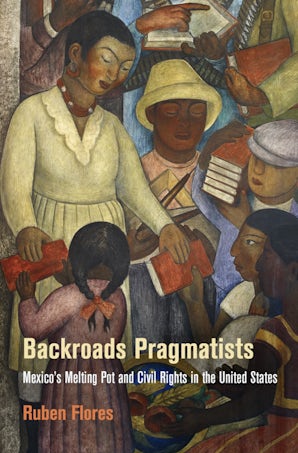 Mexico's Melting Pot and Civil Rights in the United States

Like the United States, Mexico is a country of profound cultural differences. In the aftermath of the Mexican Revolution (1910-20), these differences became the subject of intense government attention as the Republic of Mexico developed ambitious social and educational policies designed to integrate its multitude of ethnic cultures into a national community of democratic citizens. To the north, Americans were beginning to confront their own legacy of racial injustice, embarking on the path that, three decades later, led to the destruction of Jim Crow. Backroads Pragmatists is the first book to show the transnational cross-fertilization between these two movements.

In molding Mexico's ambitious social experiment, postrevolutionary reformers adopted pragmatism from John Dewey and cultural relativism from Franz Boas, which, in turn, profoundly shaped some of the critical intellectual figures in the Mexican American civil rights movement. The Americans Ruben Flores follows studied Mexico's integration theories and applied them to America's own problem, holding Mexico up as a model of cultural fusion. These American reformers made the American West their laboratory in endeavors that included educator George I. Sanchez's attempts to transform New Mexico's government agencies, the rural education campaigns that psychologist Loyd Tireman adapted from the Mexican ministry of education, and anthropologist Ralph L. Beals's use of applied Mexican anthropology in the U.S. federal courts to transform segregation policy in southern California.

Published in cooperation with the William P. Clements Center for Southwest Studies at Southern Methodist University.

PART I. THE BELOVED COMMUNITIES
1. A Symphony of Cultures
2. Shock Troops

PART II. THE SCIENTIFIC STATE
3. The Language of Experience
4. The School and Society
5. The Yaqui Way of Life

PART III. MEXICO AND THE ATTACK ON PLESSY
6. ''The Sun Has Exploded'': Integration and the California School
7. Texas and the Parallel Worlds of Civil Rights

Epilogue. Pragmatism and the Decline of Dewey

"Elegantly crafted. . . . Backroads Pragmatists is an outstanding work that has broad application and relevance well beyond its Mexican-U.S. context to scholars of studies of social reform, struggles over national membership, and political formation the world round as well as of borderlands and transnational history. . . . A welcome contribution."—Hispanic American Historical Review

"A tremendously ambitious book, Backroads Pragmatists is uncommonly original and broad in conceptualization and research. The emphasis on ideas and their transnational circulation makes this the most important work on Mexican American civil rights struggles in the last decade."—Benjamin Johnson, University of Wisconsin, Milwaukee

"A powerful reminder that the one-way intellectual relationship North Americans often assumed for U.S.-Latin American intellectual relations was simply not the case. The influence of Mexican social reform in the United States promises to be of great interest to scholars in any number of fields, including U.S. and Mexican history as well as borderlands and transnational history."—Alexander Dawson, Simon Fraser University