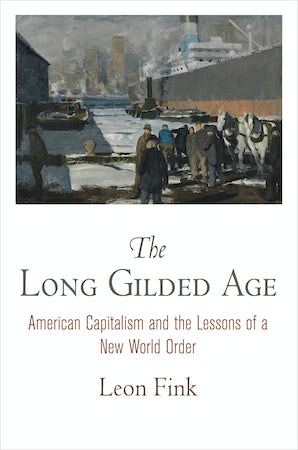 American Capitalism and the Lessons of a New World Order

From the end of the nineteenth century through the first decades of the twentieth, the United States experienced unprecedented structural change. Advances in communication and manufacturing technology brought about a revolution for major industries such as railroads, coal, and steel. The still-growing nation established economic, political, and cultural entanglements with forces overseas. Local strikes in manufacturing, urban transit, and construction placed labor issues front and center in political campaigns, legislative corridors, church pulpits, and newspapers of the era.

The Long Gilded Age considers the interlocking roles of politics, labor, and internationalism in the ideologies and institutions that emerged at the turn of the twentieth century. Presenting a new twist on central themes of American labor and working-class history, Leon Fink examines how the American conceptualization of free labor played out in iconic industrial strikes, and how "freedom" in the workplace became overwhelmingly tilted toward individual property rights at the expense of larger community standards. He investigates the legal and intellectual centers of progressive thought, situating American policy actions within an international context. In particular, he traces the development of American socialism, which appealed to a young generation by virtue of its very un-American roots and influences.

The Long Gilded Age offers both a transnational and comparative look at a formative era in American political development, placing this tumultuous period within a worldwide confrontation between the capitalist marketplace and social transformation.

"[The Long Gilded Age] reflects the author's long consideration and detailed knowledge of foundational developments in United States capitalism and culture during the final decades of the nineteenth century."—Enterprise & Society

"Leon Fink shakes up understandings of U.S. history in the late nineteenth and early twentieth centuries-his Long Gilded Age-with unique attention to and global perspective on the contradictions of free labor ideology, the resolution of labor disputes in an age of epic strikes, and the youth culture of American socialism. The Long Gilded Age is ready-made for pitched discussion, as it speaks trenchantly to our own times."—Walter Licht, University of Pennsylvania

"A splendid historical analysis of how, in light of what we know about the world in the early twenty-first century, we might reconsider the history of that forty-year era of industrial conflict and tepid reform that the author labels the Long Gilded Age."—Nelson Lichtenstein, University of California, Santa Barbara