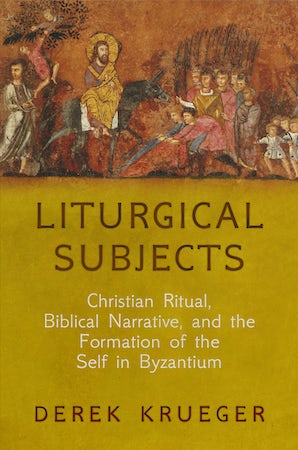 Christian Ritual, Biblical Narrative, and the Formation of the Self in Byzantium

Liturgical Subjects examines the history of the self in the Byzantine Empire, challenging narratives of Christian subjectivity that focus only on classical antiquity and the Western Middle Ages. As Derek Krueger demonstrates, Orthodox Christian interior life was profoundly shaped by patterns of worship introduced and disseminated by Byzantine clergy. Hymns, prayers, and sermons transmitted complex emotional responses to biblical stories, particularly during Lent. Religious services and religious art taught congregants who they were in relation to God and each other.

Focusing on Christian practice in Constantinople from the sixth to eleventh centuries, Krueger charts the impact of the liturgical calendar, the eucharistic rite, hymns for vigils and festivals, and scenes from the life of Christ on the making of Christian selves. Exploring the verse of great Byzantine liturgical poets, including Romanos the Melodist, Andrew of Crete, Theodore the Stoudite, and Symeon the New Theologian, he demonstrates how their compositions offered templates for Christian self-regard and self-criticism, defining the Christian "I." Cantors, choirs, and congregations sang in the first person singular expressing guilt and repentence, while prayers and sermons defined the collective identity of the Christian community as sinners in need of salvation. By examining the way models of selfhood were formed, performed, and transmitted in the Byzantine Empire, Liturgical Subjects adds a vital dimension to the history of the self in Western culture.

"Liturgical Subjects is a pioneering examination of the medieval religious subject that adds texture and nuance to studies that, so far, have tended to emphasize only the Western Christian tradition. . . . Krueger's is the first study to examine how Orthodox liturgy functioned as a mechanism for the formation of the Byzantine Christian's perception of self."—Bryn Mawr Classical Review

"Liturgical Subjects marks another important step in Krueger's enduring progress as a religious historian . . . The breadth is impressive, the juxtaposition of sacred text and ritual custom is significantly novel, the sensitive reading of hymns and prayers is a constant invitation to explore, and the easy style is a sustained pleasure."—Reading Religion

"A thrilling tour of Byzantine culture through wholly unexpected routes. With beautifully crafted prose, Krueger presents a trajectory lucidly drawn, filled with arresting insight and searing, poignant imagery; yet the account is concrete and concise, moving deftly through its chapters with impressive economy and formidable command of a wide array of textual and material evidence."—Susan Ashbrook Harvey, Brown University