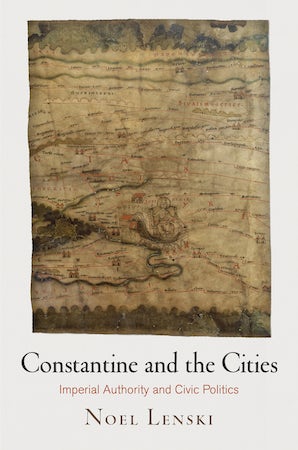 Constantine and the Cities

Over the course of the fourth century, Christianity rose from a religion actively persecuted by the authority of the Roman empire to become the religion of state—a feat largely credited to Constantine the Great. Constantine succeeded in propelling this minority religion to imperial status using the traditional tools of governance, yet his proclamation of his new religious orientation was by no means unambiguous. His coins and inscriptions, public monuments, and pronouncements sent unmistakable signals to his non-Christian subjects that he was willing not only to accept their beliefs about the nature of the divine but also to incorporate traditional forms of religious expression into his own self-presentation. In Constantine and the Cities, Noel Lenski attempts to reconcile these apparent contradictions by examining the dialogic nature of Constantine's power and how his rule was built in the space between his ambitions for the empire and his subjects' efforts to further their own understandings of religious truth.

Focusing on cities and the texts and images produced by their citizens for and about the emperor, Constantine and the Cities uncovers the interplay of signals between ruler and subject, mapping out the terrain within which Constantine nudged his subjects in the direction of conversion. Reading inscriptions, coins, legal texts, letters, orations, and histories, Lenski demonstrates how Constantine and his subjects used the instruments of government in a struggle for authority over the religion of the empire.

Introduction. Many Faces of Constantine

"Constantine and the Cities examines the impact of Constantine's conversion on the Roman empire through a careful analysis of the evidence for the conversion's impact at the local level. Despite the obvious logic of Noel Lenski's approach, he has no predecessor who has succeeded in doing anything like this, and he has succeeded admirably well. He has a terrific command of detail, writes well, and makes a nuanced case for differential reception of the emperor's policies. This book is definitely needed."—David Potter, University of Michigan

"Noel Lenski has produced a rich theoretical framework inside which he is able to consider the fragmentary contemporary sources for Constantine, some of them generated by the man himself, others by his subjects trying to make sense of him."—Michael Kulikowski, Pennsylvania State University