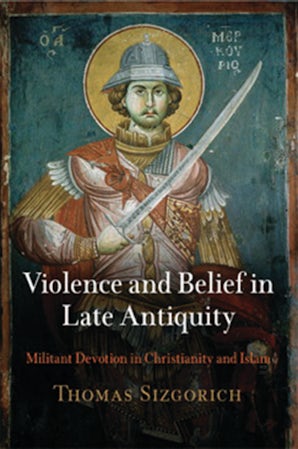 Violence and Belief in Late Antiquity

Militant Devotion in Christianity and Islam

In Violence and Belief in Late Antiquity, Thomas Sizgorich seeks to understand why and how violent expressions of religious devotion became central to the self-understandings of both Christian and Muslim communities between the fourth and ninth centuries. Sizgorich argues that the cultivation of violent martyrdom as a path to holiness was in no way particular to Islam; rather, it emerged from a matrix put into place by the Christians of late antiquity. Paying close attention to the role of memory and narrative in the formation of individual and communal selves, Sizgorich identifies a common pool of late ancient narrative forms upon which both Christian and Muslim communities drew.

In the process of recollecting the past, Sizgorich explains, Christian and Muslim communities alike elaborated iterations of Christianity or Islam that demanded of each believer a willingness to endure or inflict violence on God's behalf and thereby created militant local pieties that claimed to represent the one "real" Christianity or the only "pure" form of Islam. These militant communities used a shared system of signs, symbols, and stories, stories in which the faithful manifested their purity in conflict with the imperial powers of the world.

Introduction
Chapter 1. "The Devil Spoke from Scripture": Boundary Maintenance and Communal Integrity in Late Antiquity
Chapter 2. "The Living Voice of Kindred Blood": Narrative, Identity, and the Primordial Past
Chapter 3. "What Has the Pious in Common with the Impious?" Ambrose, Libanius, and the Problem of Late Antique Religious Violence
Chapter 4. "Are You Christians?" Violence, Ascetics, and Knowing One's Own
Chapter 5. "Horsemen by Day and Monks by Night": Narrative and Community in Islamic Late Antiquity
Chapter 6. "The Sword Scrapes away Transgressions": Ascetic Praxis and Communal Boundaries in Late Antique Islam
Chapter 7. "Do You Not Fear God?" The Khawarij in Early Islamic Society
Chapter 8. "This Is a Very Filthy Question, and No One Should Discuss It": The Messy World of Ibn Hanbal
Conclusion

"Thomas Sizgorich is . . . a scholar truly at home in both the late antique and early Islamic worlds who does a superlative job of illustrating the continuities between them."—American Historical Review

"In this bold and learned book, Thomas Sizgorich probes the ideological roots of violence in the Christian and Muslim communities of late antiquity."—Church History

"A work of erudition and eloquent argument, combined with an abiding ethical impulse underwriting its historical project. Sizgorich has done a great service by historicizing some elements of religious violence and uncovering its underlying logics with sophistication and care."—Catholic Historical Review

"Sizgorich brings the early history of Islamic martyrdom and the emergence of the concept of the shahid ('witness' or 'martyr') into a common framework of similar developments in late antique Christianity in the eastern Mediterranean and the Levant. In doing so, he shows that the two worlds were closely related in their development of apparently different kinds of aggressive, even violent behavior that were connected to ideas of ascetic self-control and the disciplining of the community."—Brent D. Shaw, Princeton University

"An original, impressive, fascinating, and very important book. Sizgorich makes a seminal contribution by offering an alternative to the tendency that treats Islam as completely 'other' from the world in which it took shape. He offers instead a vision of an Islam that is an organic part of the late antique cultural and religious world."—Nadia Maria El-Cheikh, American University of Beirut