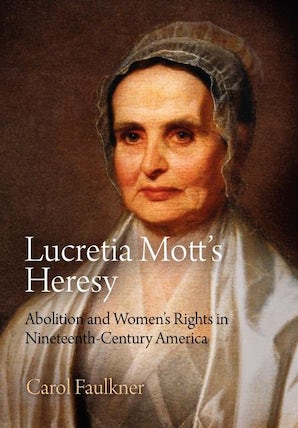 Lucretia Coffin Mott was one of the most famous and controversial women in nineteenth-century America. Now overshadowed by abolitionists like William Lloyd Garrison and feminists such as Elizabeth Cady Stanton, Mott was viewed in her time as a dominant figure in the dual struggles for racial and sexual equality. History has often depicted her as a gentle Quaker lady and a mother figure, but her outspoken challenges to authority riled ministers, journalists, politicians, urban mobs, and her fellow Quakers.

In the first biography of Mott in a generation, historian Carol Faulkner reveals the motivations of this radical egalitarian from Nantucket. Mott's deep faith and ties to the Society of Friends do not fully explain her activism—her roots in post-Revolutionary New England also shaped her views on slavery, patriarchy, and the church, as well as her expansive interests in peace, temperance, prison reform, religious freedom, and Native American rights. While Mott was known as the "moving spirit" of the first women's rights convention at Seneca Falls, her commitment to women's rights never trumped her support for abolition or racial equality. She envisioned women's rights not as a new and separate movement but rather as an extension of the universal principles of liberty and equality. Mott was among the first white Americans to call for an immediate end to slavery. Her long-term collaboration with white and black women in the Philadelphia Female Anti-Slavery Society was remarkable by any standards. Lucretia Mott's Heresy reintroduces readers to an amazing woman whose work and ideas inspired the transformation of American society.

"This is the first biography of Mott in thirty years, and it proves to be thoroughly researched, well written, and fascinating. Faulkner's accessible writing style makes this book appropriate for any reader interested in women's history generally or the history of the U.S. abolitionist and women's suffrage movements."—Library Journal

"Mott did not make her biographer's task easy; except for a three- month period in 1840, she kept no diary, and although, like her compatriot Elizabeth Cady Stanton, she often spoke publicly, unlike Stanton, she seldom wrote for publication. Faulkner has more than met the challenge; her book is interesting and well written, offering fresh perspectives at every turn on Mott's roles within Quakerism and the antislavery and women's rights movements while also providing glimpses of her personal life. . . . With this timely book, Faulkner makes a compelling case for Mott's contemporary significance."—Journal of American History

"This much-needed, coherently argued, and beautifully written biography does justice to Mott's centrality to the history of antislavery, woman's rights, Quakerism, and Philadelphia."—Lori D. Ginzberg, author of Elizabeth Cady Stanton: An American Life

"Lucretia Mott is as important to the birth of the women's rights movement as Elizabeth Cady Stanton and Susan B. Anthony. Sophisticated, lively, direct, and often riveting, Lucretia Mott's Heresy will be the definitive biography of Mott for decades to come."—Bruce Dorsey, author of Reforming Men and Women: Gender in the Antebellum City