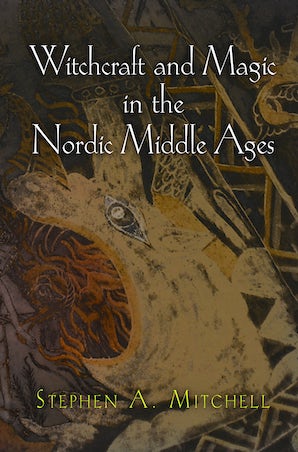 Witchcraft and Magic in the Nordic Middle Ages

by Stephen A. Mitchell

Stephen A. Mitchell here offers the fullest examination available of witchcraft in late medieval Scandinavia. He focuses on those people believed to be able—and who in some instances thought themselves able—to manipulate the world around them through magical practices, and on the responses to these beliefs in the legal, literary, and popular cultures of the Nordic Middle Ages. His sources range from the Icelandic sagas to cultural monuments much less familiar to the nonspecialist, including legal cases, church art, law codes, ecclesiastical records, and runic spells.

Mitchell's starting point is the year 1100, by which time Christianity was well established in elite circles throughout Scandinavia, even as some pre-Christian practices and beliefs persisted in various forms. The book's endpoint coincides with the coming of the Reformation and the onset of the early modern Scandinavian witch hunts. The terrain covered is complex, home to the Germanic Scandinavians as well as their non-Indo-European neighbors, the Sámi and Finns, and it encompasses such diverse areas as the important trade cities of Copenhagen, Bergen, and Stockholm, with their large foreign populations; the rural hinterlands; and the insular outposts of Iceland and Greenland.

By examining witches, wizards, and seeresses in literature, lore, and law, as well as surviving charm magic directed toward love, prophecy, health, and weather, Mitchell provides a portrait of both the practitioners of medieval Nordic magic and its performance. With an understanding of mythology as a living system of cultural signs (not just ancient sacred narratives), this study also focuses on such powerful evolving myths as those of "the milk-stealing witch," the diabolical pact, and the witches' journey to Blåkulla. Court cases involving witchcraft, charm magic, and apostasy demonstrate that witchcraft ideologies played a key role in conceptualizing gender and were themselves an important means of exercising social control.

"Mitchell's book is fascinating and valuable . . . not only because it fills a gap and gives us a rich store of material previously too little known but also because it raises questions about the distinctive resonance magic and witchcraft could have even in a time of deep and widespread integration into European culture.""—Catholic Historical Review

"This important book accomplishes several major goals. It illuminates a previously little-examined aspect of Scandinavian history, namely magic in the post-Viking but pre-Reformation centuries. It advances some valuable and broadly applicable methodologies for studying conversion and Christianization. And it successfully integrates Nordic developments into the overall history of magic and witchcraft in medieval Europe even as it highlights uniquely Scandinavian components of that history."—American Historical Review

"This well-written book will be of great interest to specialists (and students) of Old Norse culture and history as well as to historians of European magic. Finally, this is a text that ought to interest students of religion, who have here an excellent study of 'religious' change."—Journal of Religion

"Mitchell provides a comprehensive and enlightening survey of beliefs and narratives concerning supernatural aggression in medieval Scandinavia . . . [creating] an effective and evocative bridge through the long and richly storied era that begins in the pre-Christian Viking Age and ends in the Reformation."—Journal of English and Germanic Philology

"Thorough and subtle. . . . The material assembled here is rich, varied, and often unfamiliar. The sociohistorical picture Professor Mitchell draws from it will be of great value not only to scholars of Scandinavia but to anyone interested in the complex history of European witch-beliefs."—Folklore

"This excellent book aims to rectify a lacuna in the study of Nordic witchcraft beliefs. . . . To do the subject matter justice requires both a deep understanding of the history and social structures of the region and period, and an ability to work with a huge and varied corpus of source materials. Mitchell is exceptionally well suited to the task."—Scandinavian Studies

"A clearly written, sophisticated consideration of the dynamics of popular and elite cultures of religion, witchcraft, shamanism, and magic during the medieval period in the Nordic region."—The Journal of Religion and Popular Culture

"Mitchell's book provides an excellent overview of research and at the same time shows in a convincing manner how popular conceptions of witches and sorcerers changed in the North during the Middle Ages."—Svenska Dagbladet