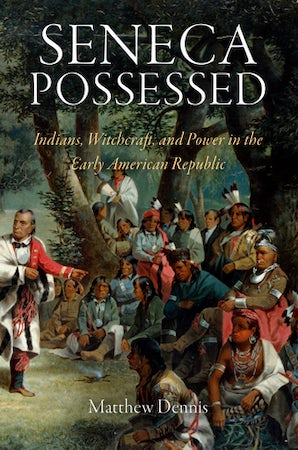 Indians, Witchcraft, and Power in the Early American Republic

Seneca Possessed examines the ordeal of a Native people in the wake of the American Revolution. As part of the once-formidable Iroquois Six Nations in western New York, Senecas occupied a significant if ambivalent place within the newly established United States. They found themselves the object of missionaries' conversion efforts while also confronting land speculators, poachers, squatters, timber-cutters, and officials from state and federal governments.

In response, Seneca communities sought to preserve their territories and culture amid a maelstrom of economic, social, religious, and political change. They succeeded through a remarkable course of cultural innovation and conservation, skillful calculation and luck, and the guidance of both a Native prophet and unusual Quakers. Through the prophecies of Handsome Lake and the message of Quaker missionaries, this process advanced fitfully, incorporating elements of Christianity and white society and economy, along with older Seneca ideas and practices.

But cultural reinvention did not come easily. Episodes of Seneca witch-hunting reflected the wider crises the Senecas were experiencing. Ironically, as with so much of their experience in this period, such episodes also allowed for the preservation of Seneca sovereignty, as in the case of Tommy Jemmy, a Seneca chief tried by New York in 1821 for executing a Seneca "witch." Here Senecas improbably but successfully defended their right to self-government. Through the stories of Tommy Jemmy, Handsome Lake, and others, Seneca Possessed explores how the Seneca people and their homeland were "possessed"—culturally, spiritually, materially, and legally—in the era of early American independence.

PART II. SPIRIT
2. Handsome Lake and the Seneca Great Awakening: Revelation and Transformation
3. Patriarchy and the Witch-Hunting of Handsome Lake

PART III. MASTERY
4. Friendly Mission: The Holy Conversation of Quakers and Senecas
5. From Longhouse to Farmhouse: Quakers and the Transformation of Seneca Rural Life
6. Seneca Repossessed, 1818-1826

"In this lucid and fascinating book . . . Dennis provides an important new interpretation of how the Senecas adapted, and what those adaptations tell us about their history and the history of the early American Republic. . . . Dennis's book is a distinctive blend of the familiar and the new, allowing us to see old questions in a different light and opening new paths for exploration."—Western Historical Quarterly

"Dennis weaves seemingly disparate threads of Seneca social, cultural, political, and economic history into a unique and convincing interpretation of a crucial era of transition in Seneca peoples' collective past. Based on deep research in archival sources housed primarily in Pennsylvania and New York, Dennis's monograph represents an important contribution not only to the historiography of Iroquois people but also to that of the early American republic."—The Pennsylvania Magazine of History and Biography

"An important book. It significantly revises our understanding of Haudenosaunee (Iroquois) history in the Early Republic, sheds new light on the turmoil that afflicted native communities in western New York in the decades following the American Revolution, and allows us to examine in close compass the complexities of culture change generally."—Michael Oberg, author of Uncas: First of the Mohegans