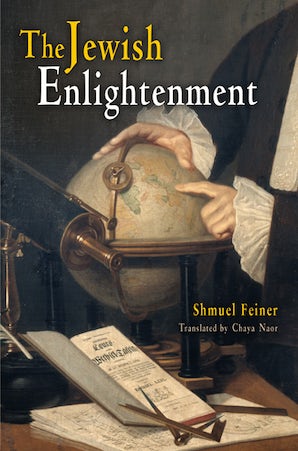 At the beginning of the eighteenth century most European Jews lived in restricted settlements and urban ghettos, isolated from the surrounding dominant Christian cultures not only by law but also by language, custom, and dress. By the end of the century urban, upwardly mobile Jews had shaved their beards and abandoned Yiddish in favor of the languages of the countries in which they lived. They began to participate in secular culture and they embraced rationalism and non-Jewish education as supplements to traditional Talmudic studies. The full participation of Jews in modern Europe and America would be unthinkable without the intellectual and social revolution that was the Haskalah, or Jewish Enlightenment.

Unparalleled in scale and comprehensiveness, The Jewish Enlightenment reconstructs the intellectual and social revolution of the Haskalah as it gradually gathered momentum throughout the eighteenth century. Relying on a huge range of previously unexplored sources, Shmuel Feiner fully views the Haskalah as the Jewish version of the European Enlightenment and, as such, a movement that cannot be isolated from broader eighteenth-century European traditions. Critically, he views the Haskalah as a truly European phenomenon and not one simply centered in Germany. He also shows how the republic of letters in European Jewry provided an avenue of secularization for Jewish society and culture, sowing the seeds of Jewish liberalism and modern ideology and sparking the Orthodox counterreaction that culminated in a clash of cultures within the Jewish community. The Haskalah's confrontations with its opponents within Jewry constitute one of the most fascinating chapters in the history of the dramatic and traumatic encounter between the Jews and modernity.

The Haskalah is one of the central topics in modern Jewish historiography. With its scope, erudition, and new analysis, The Jewish Enlightenment now provides the most comprehensive treatment of this major cultural movement.

Preface
Introduction: The Jews and the Enlightenment

PART II. JEWISH KULTURKAMPF
4. The Wessely Affair: Threats and Anxieties
—Orthodox Counterreaction
—The Subversive Intellectual
5. Projects of Enlightenment and Tests of Tolerance
—The Jewish Free School
—Religious Tolerance
Dohm: On the Civil Improvement of the Jews
—Mendelssohn's Bi'ur of the Pentateuch
—The Posner Affair
6. The Rabbinical Elite on the Defensive
—"To Publicize the Wickedness of the Evil Man, Herz Wessely"
—An Ultimatum from the Seven Berliners
—Rabbi Levin Flees Berlin
7. On Religious Power and Judaism
—Saul Levin's Ktav Yosher
—Mendelssohn's Jerusalem
—Rabbinical Reactions
—Wessely and the Italian Rabbis

PART III. THE MASKILIC REPUBLIC
8. The Society of Friends of the Hebrew Language
—Establishing a New Public Sphere
—A Maskilic Association in Königsburg
9. The Maskilim: A Group Portrait
—In Mendelssohn's Salon
—Circles and Boundaries in Maskilic Society
—Two Groups of Maskilim
10. Euchel Establishes the Haskalah Movement
—The Genesis of a Maskil
—The Haskalah Project's First Initiatives
—Hame'asef, 1785-1786
11. The Society for the Promotion of Goodness and Justice
—The Freischule Printing House
—The Haskalah Is Institutionalized
—Intensive Acculturation in Berlin
12. Growth and Radicalization
—The Haskalah Library Expands
—The Kulturkampf Escalates
—An Attack on Rabbi Raphael Kohen
—The Search for the Ideal Jewish Society

PART IV. ON TWO FRONTS
13. Crisis at the Turn of the Century
—Voices of Despair and Protest
—Decline in the 1790s
—Jewish-German Intelligentsia
—Friedländer and the Letter to Teller
14. Tensions and Polemics in the Shadow of Crisis
—Satanow and the Haskalah Library in the 1790s
—Hame'asef, 1794-1797
—The Early Burial Controversy
—The Besamim Rosh Affair
15. On Frivolity and Hypocrisy
—The Enemies of Enlightenment
—Internal Rifts
—Rabbi Josephche and Jettchen in the Brothel

"A major contribution to the historiography of the European Enlightenment."—Times Literary Supplement

"Whatever one's perspective on the Haskalah, The Jewish Enlightenment will both enrich and challenge it."—Jewish Quarterly Review

"Feiner's magnum opus . . . offers a sweeping history of the Haskalah (Jewish Enlightenment) movement in Germany, from its beginning early in the eighteenth century to its demise at the end of that century. . . . The first comprehensive study of the movement in almost a century."—Journal of Modern History

"Feiner's work is likely to become the standard book on the Haskalah and thus will become indispensable to scholars of Jewish history, literature, and thought."—David Sorkin, University of Wisconsin