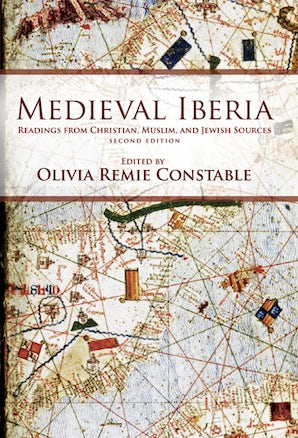 For some historians, medieval Iberian society was one marked by peaceful coexistence and cross-cultural fertilization; others have sketched a harsher picture of Muslims and Christians engaged in an ongoing contest for political, religious, and economic advantage culminating in the fall of Muslim Granada and the expulsion of the Jews in the late fifteenth century. The reality that emerges in Medieval Iberia is more nuanced than either of these scenarios can comprehend. Now in an expanded, second edition, this monumental collection offers unparalleled access to the multicultural complexity of the lands that would become modern Portugal and Spain.

The documents collected in Medieval Iberia date mostly from the eighth through the fifteenth centuries and have been translated from Latin, Arabic, Hebrew, Judeo-Arabic, Castilian, Catalan, and Portuguese by many of the most eminent scholars in the field of Iberian studies. Nearly one quarter of this edition is new, including visual materials and increased coverage of Jewish and Muslim affairs, as well as more sources pertaining to women, social and economic history, and domestic life. This primary source material ranges widely across historical chronicles, poetry, and legal and religious sources, and each is accompanied by a brief introduction placing the text in its historical and cultural setting. Arranged chronologically, the documents are also keyed so as to be accessible to readers interested in specific topics such as urban life, the politics of the royal courts, interfaith relations, or women, marriage, and the family.

"An impressive collection of sources which should prove of great interest to specialist and nonspecialist alike."—English Historical Review

"With the assistance of a large team of acknowledged experts, Constable has succeeded in assembling a distinguished miscellany of unusual interest which deserves to be warmly and widely welcomed."—History Today