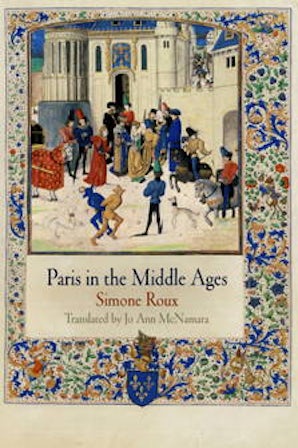 Paris in the Middle Ages

Paris in the Middle Ages was home to royalty, mountebanks, Knights Templar, merchants, prostitutes, and canons. Bursting outward from the encompassing wall, it was Europe's largest, most cosmopolitan city. Simone Roux chronicles the lives of Parisians over the course of a dozen generations as Paris grew from a military stronghold after the Battle of Bouvines in 1214 to a city recovering from the Black Death of the 1390s.

Roux peers into the private lives of people within their homes and chronicles the public world of affairs and entertainments, filling the pages of her book with laborers, shopkeepers, magistrates, thieves, and prelates. She examines the varied populations living within their own realms but sharing the streets of the metropolis, in the Latin Quarter, where the university dominated; in the precincts of Notre Dame, with its large number of clerical inhabitants; the mercantile Right Bank; and in the area surrounding the royal palace of the Louvre, with its attendant palaces for the king's satellites. She breathes life into dusty documents by explicating the lingo of street insults, making sense of the cults of saints—Sebastian, who was riddled with arrows, became the patron saint of tapestry workers—and entering the courtrooms and confessionals to tell how people actually ate, slept, dressed, fought, worked, and worshipped in the later Middle Ages.

PART ONE: PARIS AND ITS INHABITANTS (THIRTEENTH-FIFTEENTH CENTURIES)
Chapter 1: Urban Space: Designers and Occupants
—The Enceinte Defined the City
—Urban Growth to the Thirteenth Century
—Witnesses to These Transformations
—Ordinary Parisians in Urbanization
—Paris, Home of the Free
—The Big City at the End of the Middle Ages: Prosperity and Sorrow.
—Parisians in Their City
Chapter 2: Street Scenes: Marvels and Perils of Parisian Life
—The Flattery of Arts and Letters
—Prosaic Glimpses
—Normative Documents
—The Streets of Paris: Life, Crime and Punishment
—The Streets of Paris: Religious Spaces and Political Spaces
Chapter 3: Parisians
—Provincial Immigrants
—A Self-Sustaining Population
—Strangers Assimilated and Individuals Distinguished
—Tales of Ordinary Life
—Parisians Between Modernity and Tradition

PART TWO: A KALEIDOSCOPE OF HIERARCHIES
Chapter 4: The World of Money: Haves and Have Nots
—The Parisian Great Bourgeoisie
—International Financiers and Royal Financial Agents
—The Simple Bourgeois
—From Comfort to Survival: The Poor and the Impoverished
Chapter 5: The World of Political Power
—Paris, Seat of the King and his Court
—In the King's Service
—And the Nobility?
—Agents of Power: Procurators, Sergeants, Clerks, and Others
Chapter 6: The World of the Church
—Church Grandees in the Capital
—Ecclesiastical Seigneuries
—A Clerical Patchwork Quilt
—Religious Life Set the Beat for Paris Life
—Scholars and Savants
—The World of the Church and the World of Charity

PART THREE: OF WORKS AND DAYS
Chapter 7: In Shop and Workroom: Bringing Home the Bacon
—The House as Work Space and Living Space
—The World of the Artisans
—Apprentices
—Valets or Wage-Earning Journeymen
—Masters, Jurés, and Gardes
—Outside the Crafts: Domestics and Unskilled Labor
—Disturbances in the World of Labor
Chapter 8: Networks of Solidarity: Obligatory Bonds and Chosen Ties
—The Family Group, More Restrained Yet Less Constraining
—Ordinary Parisian Women in the Time of Philip the Fair
—Voluntary Attachments and Supportive Solidarities: Associations and Confraternities
Chapter 9: Lifestyles
—Intimacy: The Individual and the Community
—Lodging from Palace to Cottage
—Enclosed Space and Open Space, Public and Private
—The Nuts and Bolts of Daily Life

"Simone Roux's new history of medieval Paris, beautifully translated by Jo Ann McNamara . . . goes far beyond cold administrative mechanics or economics, and digs down into the attitudes of workaday life. It is this anecdotal material that gives the book its human edge-too often absent from a period lacking in diaries and private letters."—TLS

"One feels the city in constant motion, going from funeral to carnival, wading along streets drenched with the blood of animals flayed by butchers, applauding jongleurs and their monkeys, even watching the legal trials of beasts condemned to death."—Le Nouvel Observateur, in a review of the French edition

"A wonderful and useful book for anyone who wants to know the history of the city from the inside."—H-Net