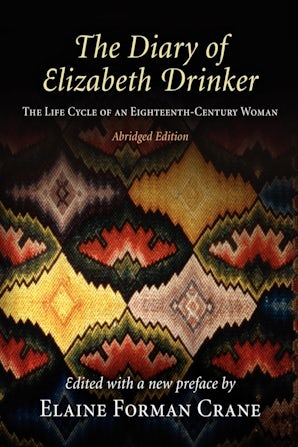 The Diary of Elizabeth Drinker

The Life Cycle of an Eighteenth-Century Woman

The journal of Philadelphia Quaker Elizabeth Sandwith Drinker (1735-1807) is perhaps the single most significant personal record of eighteenth-century life in America from a woman's perspective. Drinker wrote in her diary nearly continuously between 1758 and 1807, from two years before her marriage to the night before her last illness. The extraordinary span and sustained quality of the journal make it a rewarding document for a multitude of historical purposes. One of the most prolific early American diarists—her journal runs to thirty-six manuscript volumes—Elizabeth Drinker saw English colonies evolve into the American nation while Drinker herself changed from a young unmarried woman into a wife, mother, and grandmother. Her journal entries touch on every contemporary subject political, personal, and familial.

Focusing on different stages of Drinker's personal development within the domestic context, this abridged edition highlights four critical phases of her life cycle: youth and courtship, wife and mother, middle age in years of crisis, and grandmother and family elder. There is little that escaped Elizabeth Drinker's quill, and her diary is a delight not only for the information it contains but also for the way in which she conveys her world across the centuries.

"[Drinker's] diary, which spans the years 1758 to 1807, is the most substantial woman's diary that survives from eighteenth-century America; and it ranks with the diaries of Samuel Sewall, William Byrd, Landon Carter, John Adams, and William Bentley in its richness as a source for understanding the social and cultural history of the period it covers."—American Historical Review