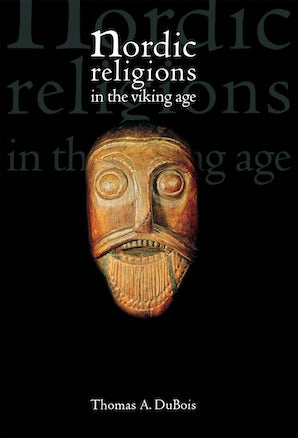 Nordic Religions in the Viking Age

The popular image of the Viking as a horn-helmeted berserker plying the ocean in a dragon-headed long boat is firmly fixed in history. Imagining Viking "conquerors" as much more numerous, technologically superior, and somehow inherently more warlike than their neighbors has overshadowed the cooperation and cultural exchange which characterized much of the Viking Age. In actuality, the Norse explorers and traders were players in a complex exchange of technology, customs, and religious beliefs between the ancient pre-Christian societies of northern Europe and the Christian-dominated nations surrounding the Mediterranean.

DuBois examines Anglo-Saxon, Celtic, and Mediterranean traditions to locate significant Nordic parallels in conceptions of supernatural beings, cults of the dead, beliefs in ghosts, and magical practices. These beliefs were actively held alongside Christianity for many years, and were finally incorporated into the vernacular religious practice. The Icelandic sagas reflect this complex process in their inclusion of both Christian and pagan details.

This work differs from previous examinations in its inclusion of the Christian thirteenth century as part of the evolution of Nordic religions from localized pagan cults to adherents of a larger Roman faith.

Thomas DuBois unravels for the first time the history of the Nordic religions in the Viking Age and shows how these ancient beliefs and their oral traditions incorporated both a myriad of local beliefs and aspects of foreign religions, most notably Christianity.

"This is a sophisticated, well-written, and convincing reconception of the nature of religious change in the early medieval world."—Journal of Ecclesiastical History

"A seminal study of Nordic religions that future scholars will not be able to avoid."—Church History