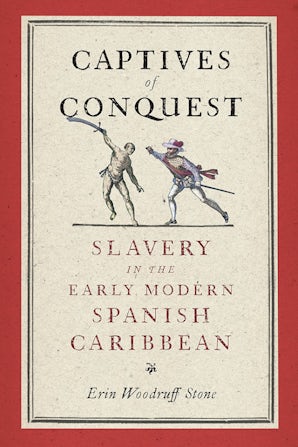 Captives of Conquest is one of the first books to examine the earliest indigenous slave trade in the Spanish Caribbean. Erin Woodruff Stone shows that the indigenous population of the region did not simply collapse from disease or warfare. Rather, upwards of 250,000 people were removed through slavery, a lucrative business sustained over centuries that formed the foundation of economic, legal, and religious policies in the Spanish colonies. The enslavement of and trade in indigenous peoples was central to the processes of conquest, as the search for new sources of Indian slaves propelled much of the early Spanish exploration into Central and South America.

Once captured, some indigenous slaves were shipped to various islands, or as far away as Spain, to be sold for immediate profit. Others became military auxiliaries, guides, miners, pearl divers, servants, or, in the case of women, unwilling sexual partners. In all these roles indigenous slaves helped mold the greater Spanish Caribbean.

Even as the number of African slaves grew in the Americas, enslaved Indians did not disappear. On the contrary, African and Indian slaves worked side by side, the methods and practices of both types of slavery influencing one another throughout the centuries. Together the two forms of slavery helped create the greater Spanish Caribbean, a space and economy founded upon the bondage and coerced labor of both indigenous and African peoples.

"[C]oncise yet deeply researched...Stone convincingly demonstrates that Indigenous slavery and the slave trade were integral to Spanish exploration, conquest, and settlement of the Americas...Scholars interested in the origins and consequences of Indigenous slavery in the Americas have much to gain by engaging with this groundbreaking work."—Hispanic American Historical Review

"Captives of Conquestis an important additiontothevoluminousscholarlyworkon slavery in the Atlantic world. It forces historians to consider other forms of slavery beyond the better-known African slavery and challenges the idea that Indigenous slavery was a marginal process in the colonization of the Americas."—H-LatAm

"[A] thorough, detailed inquiry into the Indian and African slave trades in the Spanish Caribbean… This is an engagingly written, clearly argued, and meticulously researched volume."—Choice

"Captives of Conquest is an original and important contribution to a growing body of scholarship that expands our understanding of slavery in Latin America. Through its innovative examination of indigenous slavery and by placing the circum-Caribbean and Central America at its center, it fills important lacuna in scholarly understandings of indigenous slavery in the Spanish Empire."—Emily Berquist Soule, California State University Long Beach