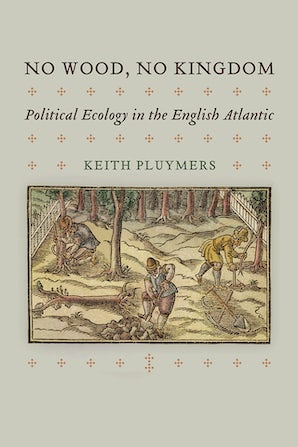 No Wood, No Kingdom

Political Ecology in the English Atlantic

In early modern England, wood scarcity was a widespread concern. Royal officials, artisans, and common people expressed their fears in laws, petitions, and pamphlets, in which they debated the severity of the problem, speculated on its origins, and proposed solutions to it. No Wood, No Kingdom explores these conflicting attempts to understand the problem of scarcity and demonstrates how these ideas shaped land use, forestry, and the economic vision of England's earliest colonies.

Popular accounts have often suggested that deforestation served as a "push" for English colonial expansion. Keith Pluymers shows that wood scarcity in England, rather than a problem of absolute supply and demand, resulted from social conflict over the right to define and regulate resources, difficulties obtaining accurate information, and competing visions for trade, forestry, and the English landscape. Domestic scarcity claims did encourage schemes to develop wood-dependent enterprises in the colonies, but in practice colonies competed with domestic enterprises rather than supplanting them. Moreover, close studies of colonial governments and the actions of individual landholders in Ireland, Virginia, Bermuda, and Barbados demonstrate that colonists experimented with different, often competing approaches to colonial woods and trees, including efforts to manage them as long-term resources, albeit ones that nonetheless brought significant transformations to the land.

No Wood, No Kingdom explores the efforts to knot together woods around the Atlantic basin as resources for an English empire and the deep underlying conflicts and confusion that largely frustrated those plans. It speaks to historians of early modern Europe, early America, and the Atlantic World but also offers key insights on early modern resource politics, forest management, and political ecology of interest to readers in the environmental humanities and social sciences as well as those interested in colonialism or economic history.

"Pluymers demonstrates dedicated historical research throughout and manages to humanize historical figures while writing in the objective fashion of a responsible researcher....[A]n admirably nuanced work of political ecology and environmental history."—Global Maritime History

"[T]his book expertly links the history of concerns about timber scarcity with English dreams about the value of the Atlantic empire during the 17th century. Readers interested in both the Atlantic World, ideas of scarcity and cornucopianism, ecological imperialism, and forests in the English Atlantic will find this book very useful."—Labour/Le Travail

"No Wood, No Kingdom represents a major addition to the growing body of literature on the nexus of labor, technology, and environment in the early modern Atlantic World. By illuminating the experiences of diverse participants-including Royal foresters, naval officials, timber speculators, planters, enslaved Africans, indentured servants, and indigenous peoples-the book offers a compelling analysis of English efforts to control and manage forests and vital timber reserves in Ireland, Virginia, New England, and the Caribbean. The writing is refreshingly robust, explicating complex ideas in clear, brisk language. Essential reading to understand the profound human and ecological impacts of colonization during the 'age of timber.'"—Jennifer Anderson, author of Mahogany: The Costs of Luxury in Early America