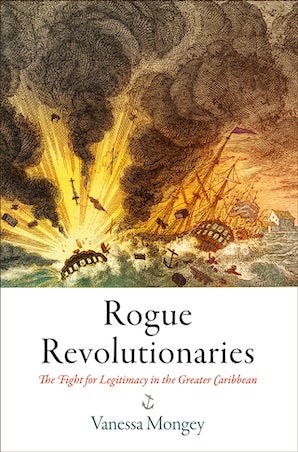 The Fight for Legitimacy in the Greater Caribbean

In 1822, the Mary departed Philadelphia and sailed in the direction of the Spanish colony of Puerto Rico. Like most vessels that navigated the Caribbean, the Mary brought together men who had served under a dozen different flags over the years. Unlike most crews, those aboard the Mary were in a different line of commerce: they exported revolution. In addition to rifles and pistols, the Mary transported a box filled with proclamations announcing the creation of the "Republic of Boricua." This imagined republic rested on one principle: equal rights for all, regardless of birthplace, race, or religion. The leaders of the expedition had never set foot in Puerto Rico. And they never would.

When we think of the Age of Revolutions, George Washington, Robespierre, Toussaint Louverture, or Simón Bolívar might come to mind. But Rogue Revolutionaries recovers the interconnected stories of now-forgotten "foreigners of desperate fortune" who dreamt of overthrowing colonial monarchy and creating their own countries. They were not members of the political and economic elite; rather, they were ship captains, military veterans, and enslaved soldiers. As a history of ideas and geopolitics grounded in the narratives of extraordinary lives, Rogue Revolutionaries shows how these men of different nationalities and ethnicities claimed revolution as a universal right and reimagined notions of sovereignty, liberty, and decolonization.

In the midst of wars and upheavals, the question of who had the legitimacy to launch a revolution and to start a new country was open to debate. Behind the growing power of nation-states, Mongey uncovers a lost world of radical cosmopolitanism grounded in the pursuit of material interests and personal prestige. In demonstrating that these would-be revolutionaries and their fleeting republics were critical to the creation of a new international order, Mongey reminds us of the importance of attending to failures, dead ends, and the unpredictable nature of history.

"Vanessa Mongey’s fascinating book joins those works that analyze the Age of Revolutions from the margins; she draws a rich and complex picture of neglected men (ship captains, teachers, printers, enslaved soldiers, and military veterans) who, although forgotten by national (often-triumphalist) historical narratives, played a significant part in planting the political seeds of a new era...This is an excellent history that brings stories of failed attempts and lost causes that, as Mongey successfully argues, were also part of the revolutionary experiment."—Hispanic American Historical Review

"In five beautifully crafted chapters, Mongey not only introduces us to a number of key actors and episodes but also highlights key dimensions of legitimate and failed state-building during the age of revolutions...The most powerful argument that emerges from Mongey’s analysis is about how to tell the history of the age of revolutions in a way that does not fall into the trap of later quasi-official accounts that would reduce this era to an automatic movement from empire to nation-state. Against the teleological version of the past as told by the victors, she brings back to life the many alternative visions and schemes, expectations, and 'futures past' (Reinhart Koselleck) that swirled around and that many contemporaries regarded as no less likely than the paths eventually taken. Her book invites us to think more systematically about what were the major ingredients of success and failure during a historical moment of major uncertainty."—Connections

"By focusing on the lives of adventurers who wandered through the Greater Caribbean during the Age of Revolutions, Vanessa Mongey's excellent book offers an interpretation of the transition from empires to nations that can help us rethink the presumed inevitability of this transition. Her analysis of these failed revolutionary adventurers makes it possible to imagine an alternative political map of the Americas, in which small republics that ended up being ephemeral could have coexisted with the national states of our own present."—Ernesto Bassi, Cornell University

"Rogue Revolutionaries is a surprising and enlightening book. Vanessa Mongey has given us a panoramic history of the ephemeral cosmopolitan revolutions that repeatedly bloomed and faded in the post-Haitian Revolution Caribbean. Historians of the early United States, and scholars of the revolutionary era more broadly, will want to reckon with the story she tells."—Nathan Perl-Rosenthal, University of Southern California