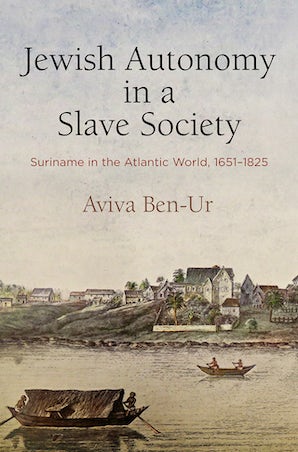 Jewish Autonomy in a Slave Society

Jewish Autonomy in a Slave Society explores the political and social history of the Jews of Suriname, a Dutch colony on the South American mainland just north of Brazil. Suriname was home to the most privileged Jewish community in the Americas where Jews, most of Iberian origin, enjoyed religious liberty, were judged by their own tribunal, could enter any trade, owned plantations and slaves, and even had a say in colonial governance.

Aviva Ben-Ur sets the story of Suriname's Jews in the larger context of Atlantic slavery and colonialism and argues that, like other frontier settlements, they achieved and maintained their autonomy through continual negotiation with the colonial government. Drawing on sources in Dutch, English, French, Hebrew, Portuguese, and Spanish, Ben-Ur shows how, from their first permanent settlement in the 1660s to the abolition of their communal autonomy in 1825, Suriname Jews enjoyed virtually the same standing as the ruling white Protestants, with whom they interacted regularly. She also examines the nature of Jewish interactions with enslaved and free people of African descent in the colony. Jews admitted both groups into their community, and Ben-Ur illuminates the ways in which these converts and their descendants experienced Jewishness and autonomy. Lastly, she compares the Jewish settlement with other frontier communities in Suriname, most notably those of Indians and Maroons, to measure the success of their negotiations with the government for communal autonomy. The Jewish experience in Suriname was marked by unparalleled autonomy that nevertheless developed in one of the largest slave colonies in the New World.

Introduction. Jews, Slavery, and Suriname in the Atlantic World
Chapter 1. A Jewish Village in a Slave Society
Chapter 2. The Paradox of Privilege
Chapter 3. From Immigrants to Rooted Migrants
Chapter 4. The Emergence of Eurafrican Jews
Chapter 5. The Quest for Eurafrican Jewish Equality
Chapter 6. Purim in the Public Eye
Chapter 7. The Abolition of Jewish Communal Autonomy
Conclusion. True Settlers in a Slave Society

"Jewish Autonomy in a Slave Society sets a new standard in scholarship for early American Jewish history. Exceptionally well grounded in archival sources yet solidly framed within theoretical frameworks, it problematizes Jewish subalterity archetypes and the triumphalism of early American Jewish history. Clearing a path toward understanding Jewish creolization, it is a model of transdisciplinarity, blending equal expertise in Jewish and Atlantic studies. Lastly, it is a highly effective communal history of the Jews in Suriname."—AJS Review

"[I]mpeccably researched, and compellingly written…Ben-Ur makes a number of important points in her work – points that will force scholars to re-evaluate their interpretations of Jewish history in Suriname, the Americas, and, indeed, the Atlantic World…[T]his work will likely become a jumping off point for all sorts of exciting new research in the field of Jewish, Caribbean, and Atlantic histories, and it will serve as a model for how to approach tricky, complicated and entangled histories."—Journal of Early American History

"This book is a delight to read. The author combines an evident expertise in the historiographies of both Atlantic and Jewish history with a commendable knowledge of the relevant archival sources in a number of languages, and on top of that manages to write in a tone that is at once lucid and evocative. Jewish Autonomy in a Slave Society is a major accomplishment."—Journal of Colonialism and Colonial History

"The importance of studying transnational histories such as Jewish Autonomy in a Slave Society cannot be overstated in providing a framework to understanding Jewish diaspora intermediaries in the process of colonization in the Atlantic world… [A] superbly researched history."—Religious Studies Review

"When a gifted and learned scholar like Aviva Ben-Ur writes a volume on the political and social history of the Jews of Suriname, one is wise to pay heed… With her great linguistic skills and the comparisons Ben-Ur is able to make with other colonial societies, she sets the bar high for future scholarship… Ben-Ur has written an exemplary study of the Surinamese Jews."—NTT Journal for Theology and the Study of Religion

"In Jewish Autonomy in a Slave Society, Aviva Ben-Ur contributes an important study to the history of creolization by centering the Jewish community in Suriname. She explores the role of the community in an emblematic Caribbean slave colony and narrates the understudied history of a society that was created by the entanglement of African and Jewish cultures."—Karwan Fatah-Black, Leiden University

"Aviva Ben-Ur provides a fascinating glimpse into a Dutch Atlantic world that most of us know little about and a portrait of Jewish life in a slave society that is not only important but also at odds with what we usually understand."—Trevor Burnard, University of Hull