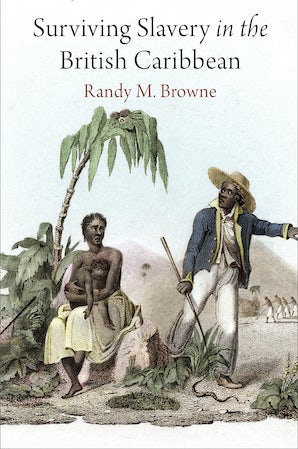 Surviving Slavery in the British Caribbean

Atlantic slave societies were notorious deathtraps. In Surviving Slavery in the British Caribbean, Randy M. Browne looks past the familiar numbers of life and death and into a human drama in which enslaved Africans and their descendants struggled to survive against their enslavers, their environment, and sometimes one another. Grounded in the nineteenth-century British colony of Berbice, one of the Atlantic world's best-documented slave societies and the last frontier of slavery in the British Caribbean, Browne argues that the central problem for most enslaved people was not how to resist or escape slavery but simply how to stay alive.

Guided by the voices of hundreds of enslaved people preserved in an extraordinary set of legal records, Browne reveals a world of Caribbean slavery that is both brutal and breathtakingly intimate. Field laborers invoked abolitionist-inspired legal reforms to protest brutal floggings, spiritual healers conducted secretive nighttime rituals, anxious drivers weighed the competing pressures of managers and the condition of their fellow slaves in the fields, and women fought back against abusive masters and husbands. Browne shows that at the core of enslaved people's complicated relationships with their enslavers and one another was the struggle to live in a world of death.

Provocative and unflinching, Surviving Slavery in the British Caribbean reorients the study of Atlantic slavery by revealing how differently enslaved people's social relationships, cultural practices, and political strategies appear when seen in the light of their unrelenting struggle to survive.

"[A] deep microhistory, based on fortuitously rich sources that a gifted historian uses to illuminate a previously obscure world with profound humanity . . . Browne's book on Berbice gets us more deeply into the lives of enslaved people in the Caribbean than any other work of nonfiction that comes readily to mind."—Journal of British Studies

"[A] carefully constructed and deeply researched study that challenges many prevailing perspectives, tropes, and arguments . . . This is a compelling interpretation that adds new layers of complexity to our understanding of the social and political worlds of New World slavery."—Slavery & Abolition

"Concisely and elegantly written . . . Surviving Slavery focuses on how slaves, masters, and colonial authorities negotiated the terms of labor, punishment, provisioning, and other quotidian issues. Boasting a rigorous methodology and deep archival research . . . Browne makes an outstanding contribution to our understanding of the legalities of Atlantic slavery and the varieties of lived experience among the enslaved."—Journal of Social History

"Surviving Slavery in the British Caribbean is a necessary, brilliantly researched, and well-narrated history. It deserves to become standard reading for scholars interested in imperial reform, the practice of imperial law, and the everyday politics of colonial subjects."—Victorian Studies

"[An] illuminating new monograph on the slave society of Berbice during the era of amelioration . . . What results from Browne's research is a monograph replete with stories of the everyday struggles and conflicts that characterized every Atlantic slave society. Browne has crafted the best portrait of the slave driver to be found in the literature."—Social History