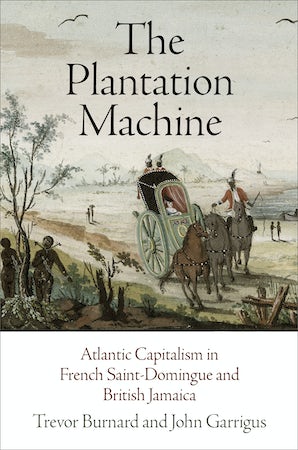 Jamaica and Saint-Domingue were especially brutal but conspicuously successful eighteenth-century slave societies and imperial colonies. These plantation regimes were, to adopt a metaphor of the era, complex "machines," finely tuned over time by planters, merchants, and officials to become more efficient at exploiting their enslaved workers and serving their empires. Using a wide range of archival evidence, The Plantation Machine traces a critical half-century in the development of the social, economic, and political frameworks that made these societies possible. Trevor Burnard and John Garrigus find deep and unexpected similarities in these two prize colonies of empires that fought each other throughout the period. Jamaica and Saint-Domingue experienced, at nearly the same moment, a bitter feud between planters and governors, a violent conflict between masters and enslaved workers, a fateful tightening of racial laws, a steady expansion of the slave trade, and metropolitan criticism of planters' cruelty.

The core of The Plantation Machine addresses the Seven Years' War and its aftermath. The events of that period, notably a slave poisoning scare in Saint-Domingue and a near-simultaneous slave revolt in Jamaica, cemented white dominance in both colonies. Burnard and Garrigus argue that local political concerns, not emerging racial ideologies, explain the rise of distinctive forms of racism in these two societies. The American Revolution provided another imperial crisis for the beneficiaries of the plantation machine, but by the 1780s whites in each place were prospering as never before—and blacks were suffering in new and disturbing ways. The result was that Jamaica and Saint-Domingue became vitally important parts of the late eighteenth-century American empires of Britain and France.

"[The Plantation Machine is] an exciting intellectual history of the place and agency of the plantation system in the making of eighteenth-century Atlantic capitalism. In their analysis of the two largest and most profitable sugar colonies in the Caribbean from 1740 to 1788, a crucial several decades in that region's history, these two scholars ask us to forget what we already knew upon opening their book, as they present us with fresh insights on two paralleled pasts."—American Historical Review

"The Plantation Machine is in many ways, the strongest one-volume history of Saint-Domingue written thus far in English . . . {It] is essential reading for any scholar of the eighteenth century or French capitalism and industrialization or anyone who still considers Napoleon I's empire to be the first French empire."—H-France

"The Plantation Machine is an ambitious and important book. The collaborative work of Trevor Burnard and John Garrigus, combining deep research into French and British Caribbean plantations and slavery, depicts the two leading plantation slave societies at the peak of their wealth, power, and brutality. This book should be read by early Americanists and Atlantic World and even European historians who want to understand plantation slavery and its place in the Atlantic and Euro-American worlds."—Simon Newman, University of Glasgow

"Jewels in the crowns of the British and French empires, the neighboring sugar islands of Jamaica and Saint Domingue dominated the Atlantic economy of the eighteenth century and were central sites in the period's world-shaking wars. This pathbreaking dual history by two leading experts shows us how the ruthless exploitation of slaves in the Caribbean produced the wealth that inspired the period's faith in progress and shaped the rivalry between Europe's two leading powers."—Jeremy Popkin, University of Kentucky