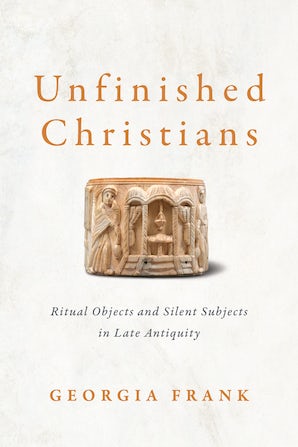 What can we know about the everyday experiences of Christians during the fourth, fifth, and sixth centuries? How did non-elite men and women, enslaved, freed, and free persons, who did not renounce sex or choose voluntary poverty become Christian? They neither led a religious community nor did they live in entirely Christian settings. In this period, an age marked by “extraordinary” Christians—wonderworking saints, household ascetics, hermits, monks, nuns, pious aristocrats, pilgrims, and bishops—ordinary Christians went about their daily lives, in various occupations, raising families, sharing households, kitchens, and baths in religiously diverse cities. Occasionally they attended church liturgies, sought out local healers, and visited martyrs’ shrines. Barely and rarely mentioned in ancient texts, common Christians remain nameless and undifferentiated.

Unfinished Christians explores the sensory and affective dimensions of ordinary Christians who assembled for rituals. With precious few first-person accounts by common Christians, it relies on written sources not typically associated with lived religion: sermons, liturgical instruction books, and festal hymns. All three genres of writing are composed by clergy for use in ritual settings. Yet they may also provide glimpses of everyday Christians’ lives and experiences. This book investigates the habits, objects, behaviors, and movements of ordinary Christians by mining festal preaching by John Chrysostom, Cyril of Jerusalem, Gregory of Nyssa, and Romanos the Melodist, among others. It also mines liturgical instructions to explore the psalms and other songs performed on various feast days. “Unfinished,” then, connotes the creativity and agency of unremarkable Christians who engaged in making religious experiences: the “Christian-in-progress” who learns to work with material and bring something into being; the artisans who attended sermons; and, more widely, the bearers of embodied knowing.

Georgia Frank is Charles A. Dana Professor of Religion at Colgate University.