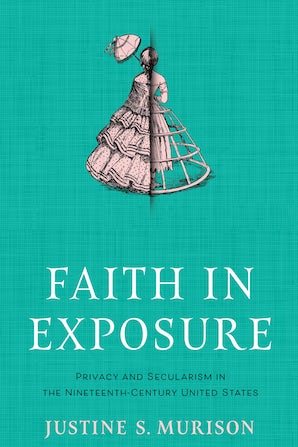 Recent legal history in the United States reveals a hardening tendency to treat religious freedom and sexual and reproductive freedom as competing, even opposing, claims on public life. They are united, though, by the fact that both are rooted in our culture’s understanding of privacy. Faith in Exposure shows how, over the course of the nineteenth century, privacy came to encompass such contradictions—both underpinning the right to sexual and reproductive rights but also undermining them in the name of religious freedom.

Drawing on the interdisciplinary field of secular studies, Faith in Exposure brings a postsecular orientation to the historical emergence of modern privacy. The book explains this emergence through two interlocking stories. The first examines the legal and cultural connection of religion with the private sphere, showing how privacy became a moral concept that informs how we debate the right to be shielded from state interference, as well as who will be afforded or denied this protection. This conflation of religion with privacy gave rise, the book argues, to a “secular sensibility” that was especially invested in authenticity and the exposure of hypocrisy in others.

The second story examines the development of this “secular sensibility” of privacy through nineteenth-century novels. The preoccupation of the novel form with private life, and especially its dependence on revelations of private desire and sexual secrets, made it the perfect vehicle for suggesting that exposure might be synonymous with morality itself. Each chapter places key authors into wider contexts of popular fiction and periodical press debates. From fears over religious infidelity to controversies over what constituted a modern marriage and conspiracy theories about abolitionists, these were the contests, Justine S. Murison argues, that helped privacy emerge as both a sensibility and a right in modern, secular America.

"What is a secular sensibility? And what has it to do with the ecologies of publicity and privacy that govern American modernity? In a series of bravura readings, Justine S. Murison returns us to the tumult of the American nineteenth century, where disestablishment, abolition, and a welter of renegade faith-practices together made a complex virtue of the intimate self’s artful, authentic disclosure. Faith in Exposure is a wonderful addition to the burgeoning archive of Americanist postsecular critique."—Peter Coviello, author of Make Yourselves Gods: Mormons and the Unfinished Business of American Secularism

"Spanning from Thomas Paine to Henry James, Faith in Exposure unearths a rich archive of late eighteenth and nineteenth-century materials and examines the shift of moral life from the public sphere of organized, state-sponsored religion to the private sphere. Beautifully written, intensively researched, and immensely important, Faith in Exposure changes how we understand secularity and offers a major contribution to nineteenth-century American religious and literary studies."—Claudia Stokes, author of The Altar at Home: Sentimental Literature and Nineteenth-Century American Religion

"Nineteenth-century Americans worried that morality would suffer when religion was made private. Faith in Exposure identifies the solution that appeased this worry—that privacy would always be made public—and the irresolvable tensions resulting from this solution. The always collapsing binaries that result, especially those of privacy/publicity and faith/proof, show why privacy is such a fragile ground for protecting rights and imagining subjectivity."—Gretchen Murphy, author of New England Women Writers, Secularity, and the Federalist Politics of Church and State