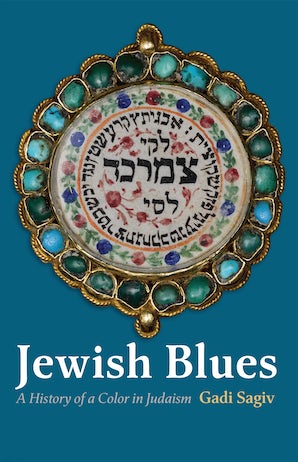 A History of a Color in Judaism

Jewish Blues presents a broad cultural, social, and intellectual history of the color blue in Jewish life between the sixteenth and twenty-first centuries. Bridging diverse domains such as religious law, mysticism, eschatology, as well as clothing and literature, this book contends that, by way of a protracted process, the color blue has constituted a means through which Jews have understood themselves.

In ancient Jewish texts, the term for blue, tekhelet, denotes a dye that serves Jewish ritual purposes. Since medieval times, however, Jews gradually ceased to use tekhelet in their ritual life. In the nineteenth century, however, interest in restoring ancient dyes increased among European scholars. In the Jewish case, rabbis and scientists attempted to reproduce the ancient tekhelet dye. The resulting dyes were gradually accepted in the ritual life of many Orthodox Jews. In addition to being a dye playing a role in Jewish ritual, blue features prominently in the Jewish mystical tradition, in Jewish magic and popular custom, and in Jewish eschatology. Blue is also representative of the Zionist movement, and it is the only chromatic color in the national flag of the State of Israel.

Through the study of the changing roles and meanings attributed to the color blue in Judaism, Jewish Blues sheds new light on the power of a visual symbol in shaping the imagination of Jews throughout history. The use of the color blue continues to reflect pressing issues for Jews in our present era, as it has become a symbol of Jewish modernity.

"Gadi Sagiv’s Jewish Blues masterfully unravels the history of tekhelet, a biblically mandated blue pigment that was lost in antiquity, discussed by legalists, exegetes, and mystics for millennia, and rediscovered with messianic verve in recent decades. Sagiv has created a deeply polychrome and compelling narrative that stretches the blue thread of Jewish tradition to the very heart of contemporary culture studies."—Steven Fine, Yeshiva University