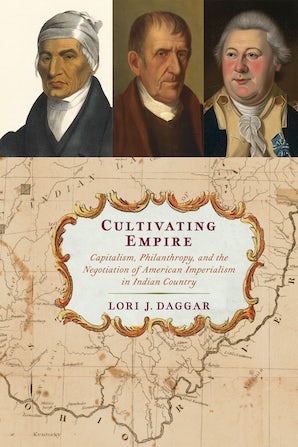 Capitalism, Philanthropy, and the Negotiation of American Imperialism in Indian Country

Cultivating Empire charts the connections between missionary work, capitalism, and Native politics to understand the making of the American empire in the late-eighteenth and early-nineteenth centuries. It presents American empire-building as a negotiated phenomenon that was built upon the foundations of earlier Atlantic empires, and it shows how U.S. territorial and economic development went hand-in-hand. Lori. J. Daggar explores how Native authority and diplomatic protocols encouraged the fledgling U.S. federal government to partner with missionaries in the realm of Indian affairs, and she charts how that partnership borrowed and deviated from earlier imperial-missionary partnerships.

Employing the terminology of speculative philanthropy to underscore the ways in which a desire to do good often coexisted with a desire to make profit, Cultivating Empire links eighteenth- and early-nineteenth-century U.S. Indian policy—often framed as benevolent by its crafters—with the emergence of racial capitalism in the United States. In the process, Daggar argues that Native peoples wielded ideas of philanthropy and civilization for their own purposes and that Indian Country played a critical role in the construction of the U.S. imperial state and its economy. Rather than understand civilizing missions simply as tools for assimilation, then, Cultivating Empire reveals that missions were hinges for U.S. economic and political development that could both devastate Indigenous communities and offer Native peoples additional means to negotiate for power and endure.

"In Cultivating Empire, Lori Daggar illuminates the intertwined histories of missions, settler colonialism, and Indigenous survivance in the Northwest Territory. It is a deeply researched and carefully argued book that provides new insights into the early United States’ careful attempts to position itself as a ‘benevolent empire.’ Sure to become the standard text on the ‘civilization plan,’ Cultivating Empire is a must-read for anyone interested in the history of American imperialism."—Emily Conroy-Krutz, Michigan State University