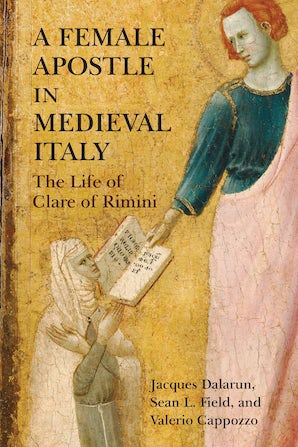 A Female Apostle in Medieval Italy

The Life of Clare of Rimini

This book centers on a fascinating woman, Clare of Rimini (c. 1260 to c. 1324–29), whose story is preserved in a fascinating text. Composed by an anonymous Franciscan, the Life of the Blessed Clare of Rimini is the earliest known saint’s life originally written in Italian, and one of the few such lives to be written while its subject was still living. It tells the story of a controversial woman, set against the background of her roiling city, her star-crossed family, and the tumultuous political and religious landscape of her age.

Twice married, twice widowed, and twice exiled, Clare established herself as a penitent living in a roofless cell in the ruins of the Roman walls of Rimini. She sought a life of solitary self-denial, but was denounced as a demonic danger by local churchmen. Yet she also gained important and influential supporters, allowing her to establish a fledgling community of like-minded sisters. She traveled to Assisi, Urbino, and Venice, spoke out as a teacher and preacher, but also suffered a revolt by her spiritual daughters.

A Female Apostle in Medieval Italy presents the text of the Life in English translation for the first time, bringing modern readers into Clare’s world in all its excitement and complexity. Each chapter opens a different window into medieval society, exploring topics from political power to marriage and sexuality, gender roles to religious change, pilgrimage to urban structures, sanctity to heresy. Through the expert guidance of scholars and translators Jacques Dalarun, Sean L. Field, and Valerio Cappozzo, Clare’s life and context become a springboard for readers to discover what life was like in a medieval Italian city.