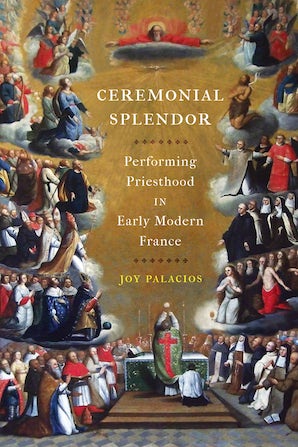 By the end of France’s long seventeenth century, the seminary-trained, reform-minded Catholic priest had crystalized into a type recognizable by his clothing, gestures, and ceremonial skill. Although critics denounced these priests as hypocrites or models for Molière’s Tartuffe, seminaries associated the features of this priestly identity with the idea of the vray ecclésiastique, or true churchman.

Ceremonial Splendor examines the way France’s early seminaries promoted the emergence and construction of the true churchman as a mode of embodiment and ecclesiastical ideal between approximately 1630 and 1730. Based on an analysis of sources that regulated priestly training in France, such as seminary rules and manuals, liturgical handbooks, ecclesiastical pamphlets and conferences, and episcopal edicts, the book uses theories of performance to reconstruct the way clergymen learned to conduct liturgical ceremonies, abide by clerical norms, and aspire to perfection.

Joy Palacios shows how the process of crafting a priestly identity involved a wide range of performances, including improvisation, role-playing, and the display of skills. In isolation, any one of these performance obligations, if executed in a way that drew attention to the self, could undermine a clergyman’s priestly persona and threaten the institution of the priesthood more broadly. Seminaries counteracted the ever-present threat of theatricality by ceremonializing the clergyman’s daily life, rendering his body and gestures contiguous with the mass. Through its focus on priestly identity, Ceremonial Splendor reconsiders the relationship between Church and theater in early modern France and uncovers ritual strategies that continue to shape religious authority today.