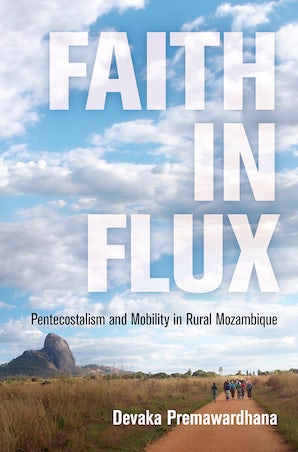 Pentecostalism and Mobility in Rural Mozambique

Pentecostalism—Africa’s fastest growing form of Christianity—is known for displacing that which came before. Yet anthropologist Devaka Premawardhana witnessed neither massive growth nor dramatic rupture in the part of Mozambique where he worked. His research opens a new paradigm for the study of global Christianity, one centered on religious fluidity and existential mobility, and on how indigenous traditions remain vibrant and influential—even in the lives of converts.

In Faith in Flux, Premawardhana narrates a range of everyday hardships faced by a rural Makhuwa-speaking people—snakebites and elephant invasions, chronic illnesses and recurring wars, disputes within families and conflicts with the state—to explore how wellbeing sometimes entails not stability but mobility. In their ambivalent response to Pentecostalism, as in their historical resistance to sedentarization and other modernizing projects, the Makhuwa reveal crucial insights about what it is to be human: about changing as a means of enduring, becoming as a mode of being, and converting as a way of life.

PART I. Othama—To Move
Chapter 1. A Fugitive People
Chapter 2. Between the River and the Road

PART III. Okhalano—To Be With
Chapter 5. A Religion of Her Own?
Chapter 6. Moved by the Spirit