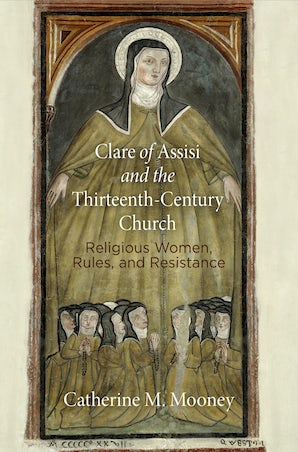 Clare of Assisi and the Thirteenth-Century Church

In a work based on a meticulous analysis of sources, many of them previously unexplored, Catherine M. Mooney upends the received account of Clare of Assisi's founding of the Order of San Damiano, or Poor Clares. Mooney offers instead a stark counternarrative: Clare, her sisters of San Damiano, and their allies struggled against a papal program bent on regimenting, enriching, and enclosing religious women in the thirteenth century, a program that proved largely successful.

Mooney demonstrates that Clare (1194-1253) established a single community that was soon cajoled, perhaps even coerced, into joining an order previously founded by the papacy. Artfully renaming it after Clare's San Damiano with Clare as its putative mother, Pope Gregory IX enhanced his order's cachet by associating it also with Clare's famous friend, Francis of Assisi. Mooney traces how Clare and her allies in other houses attempted to follow Francis's directives rather than the pope's, divested themselves of property against the pope's orders, and organized in an attempt to change papal rule; and she shows how, after Francis's death, the women's relationships with the Franciscans themselves grew similarly fraught. Clare's pursuit of her vision proved relentless: at the time of her death, she newly identified her community as the Order of Poor Sisters and allied it unambiguously with Francis and his friars.

Overturning another myth, Mooney reveals how only in the late nineteenth century did Clare come to be known as the sole author of a rule she had written collaboratively with others. Throughout, the story of Clare and her sisters emerges as a chapter in the long history of women who tried to define their religious identities within a Church more committed to unity and conformity than to diversity and difference.