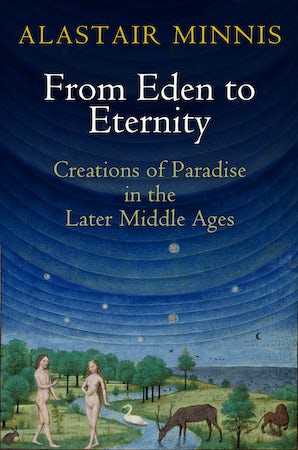 From Eden to Eternity

Creations of Paradise in the Later Middle Ages

Did Adam and Eve need to eat in Eden in order to live? If so, did human beings urinate and defecate in paradise? And since people had no need for clothing, transportation, or food, what purpose did animals serve? Would carnivorous animals have preyed on other creatures? These were but a few of the questions that plagued medieval scholars for whom the idea of Eden proved an endless source of contemplation. As theologians attempted to reconcile their own experiences with the realities of the prelapsarian paradise, they crafted complex answers that included explanations of God's interaction with creation, the existence of death, and man's dominion over nature.

In From Eden to Eternity, Alastair Minnis examines accounts of the origins of the human body and soul to illustrate the ways in which the schoolmen thought their way back to Eden to discover fundamental truths about humanity. He demonstrates how theologians sought certainty in matters of orthodox Christian thought and also engaged in speculation about matters that, they freely admitted, were not susceptible to firm proof. Moreover, From Eden to Eternity argues that the preoccupation with paradise belonged not only to the schools but to society as a whole, and it traces how lay writers and artists also attempted to interpret the origins of human society. Eden transcended human understanding, yet it afforded an extraordinary amount of creative space to late medieval theologians, painters, and poets as they tried to understand the place that God had deemed worthy of the creature made in His image.

Chapter 1. The Body in Eden
—Creating Bodies
—Bodily Functions
—The Pleasures of Paradise
—Being Fruitful and Multiplying
—The Children of Eden
—What Adam Knew
—Creating Souls
—Eden as Human Habitat

Chapter 3. Death and the Paradise Beyond
—The Death of the Animal
—The Body Returns
—Representing Paradise: From Eden to the Patria
—Perfecting Children's Bodies
—Rewarding Inequality
—Negotiating the Material
—Resurrecting the Senses
—Somewhere over the Rainbow

"Like all of Minnis's work, [From Eden to Eternity] is impressively learned and couched in fluent and charming prose. . . . It requires slow and careful reading, but the argument is clearly made, the information provided is fascinating, and the effort is worthwhile. To read the book through, moreover, is to receive not only a thorough review of medieval ideas about Paradise but an excellent introduction to medieval scholasticism. . . . In addition to his remarkable learning, Minnis is a fine literary critic, and I know no other medievalist capable of presenting work so learned with his deftness and subtlety."—Journal of English and Germanic Philology

"In this beautifully illustrated and fine publication, Alastair Minnis discusses an omnipresent subject in the cultural history of Christianity in the later Middle Ages, but one which has been somewhat overlooked in current scholarship, namely reflection on the beginning of human time (the paradise of Eden) and its ending (the paradise of eternity). . . . Minnis has brought together an immense wealth of information in this volume, and it offers copious material for further theological research."—Speculum

"I could not put this book down. From start to finish this is a wonderfully engaging study of how biblical accounts of Eden and eternity furnished early writers and artists with an extraordinarily capacious space through which to think and to argue. Combining the deepest erudition with lively discussion, Alastair Minnis opens up a compelling area of medieval scholarship."—The Spenser Review

"Professor Alastair Minnis's study of medieval imaginings of the Christian paradises of Eden and heaven showcases his decades of expertise in medieval literature and theology . . . From Eden to Eternity is a highly scholarly and yet highly readable book that addresses issues occasioning volumes of argument throughout the Middle Ages. As Professor Minnis shows, these arguments always had significant social and political consequences. As such, this book will be of great importance for scholars of the Middle Ages, while non-specialist readers will no doubt be fascinated by its elegant and eloquent arguments as well."—Journal of Religious History

""Alastair Minnis's From Eden to Eternity is an important study which explores the ways in which biblical accounts provided an imaginative space for medieval writers and artists to debate and explore a detailed understanding and representation of Eden and paradise. . . . The achievement of this book is not just the opening up of new areas of scholarship, but the presentation of a mass of complex material in an engaging and, at times, conversational style, effortlessly weaving together detail from seemingly disparate sources, and this is enhanced by the inclusion of a substantial quantity of visual material and accompanying discussion of this medieval art and manuscript illumination which completes the range of representations of paradise."—The Year's Work in English Studies

"In exploring a vast repertoire of medieval speculation about Eden and heaven Alastair Minnis has almost single-handedly opened up a new and unfamiliar world of scholarship."—Denys Turner, Yale University

"From Eden to Eternity is a wonderful book, intensely engaged and engaging, propelled by a real urgency, and full of learning lightly worn. This book will become the 'go-to' study of the topic."—Nicholas Watson, Harvard University

"Medieval theologians described the glorified body as possessing integrity, agility, and clarity. Those same remarkable gifts characterize Alastair Minnis's fascinating study of medieval and early modern representations of Eden and paradise. From Adam to Aristotle, newts to Noah, and Genesis to genitalia, Minnis's virtuoso study combines scholarly utilitas with his characteristic intellectual curiositas to produce a compelling overview, beautifully illuminated by his discussions of medieval art and manuscript illumination."—Vincent Gillespie, University of Oxford

"Minnis presents medieval attitudes to sex, power, death, resurrection, and even animals, through the prism of conjectures about human nature as it would have been without original sin."—D. L. d'Avray, University College London

"Utterly absorbing: From Eden to Eternity takes us through the turns and counter-turns of medieval scholastic debates over what must have been present in the first Eden and what we might find in the final paradise. Minnis effortlessly demonstrates that scholarly thought did not exist in its own sphere, but rather was reflected and reflected upon in secular literature and popular commentary."—Gillian Rudd, University of Liverpool