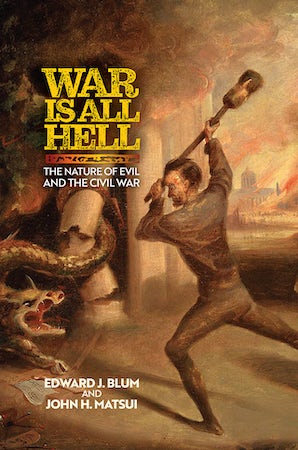 War Is All Hell

The Nature of Evil and the Civil War

During his first inaugural address, Abraham Lincoln expressed hope that the "better angels of our nature" would prevail as war loomed. He was wrong. The better angels did not, but for many Americans, the evil ones did. War Is All Hell peers into the world of devils, demons, Satan, and hell during the era of the American Civil War. It charts how African Americans and abolitionists compared slavery to hell, how Unionists rendered Confederate secession illegal by linking it to Satan, and how many Civil War soldiers came to understand themselves as living in hellish circumstances.

War Is All Hell also examines how many Americans used evil to advance their own agendas. Sometimes literally, oftentimes figuratively, the agents of hell and hell itself became central means for many Americans to understand themselves and those around them, to legitimate their viewpoints and actions, and to challenge those of others. Many who opposed emancipation did so by casting Abraham Lincoln as the devil incarnate. Those who wished to pursue harsher war measures encouraged their soldiers to "fight like devils." And finally, after the war, when white men desired to stop genuine justice, they terrorized African Americans by dressing up as demons.

A combination of religious, political, cultural, and military history, War Is All Hell illuminates why, after the war, one of its leading generals described it as "all hell."

"This compact, lively book offers a fresh angle on religion and the U.S. Civil War...Using the tools of cultural history, War Is All Hell connects Americans' beliefs about supernatural evil to how they made personal and collective sense of the violence and dehumanization of warfare...Whatever its underlying meaning, 'evil' was no doubt key to how many experienced the Civil War, making this book a worthy addition to the history of religion and conflict during those years and beyond. It is also a timely one, as claims about supernatural evil are once again resurgent in American politics."—Journal of Southern History

Other historians have examined the Civil War for invocations of the divine. This book instead looks for references to the devil. Blum and Matsui weave a compelling narrative that shows how, before the war, satanic imagery and language were relatively rare, especially in reference to battlefield comportment.

"From the hellishness of slavery, to the horrors of warfare, to the terrorism of the Klan, images of the demonic suffused American culture and confounded Abraham Lincoln's appeals to our 'better angels.' In this fascinating study of how Americans conceptualized evil, Blum and Matsui make a banner contribution to Civil War studies."—Elizabeth R. Varon, author of Armies of Deliverance: A New History of the Civil War

"As no other generation has, Civil War era Americans confronted the evil within. Blum and Matsui offer a remarkably original and graceful meditation on how Americans traced their descent into civil war to the ascendance of evil and Satan. Every page is sprinkled with fascinating and unexpected discoveries. War Is All Hell is a reminder of how much gifted historians and writers can teach us about the Civil War."—W. Fitzhugh Brundage, author of Civilizing Torture: An American Tradition